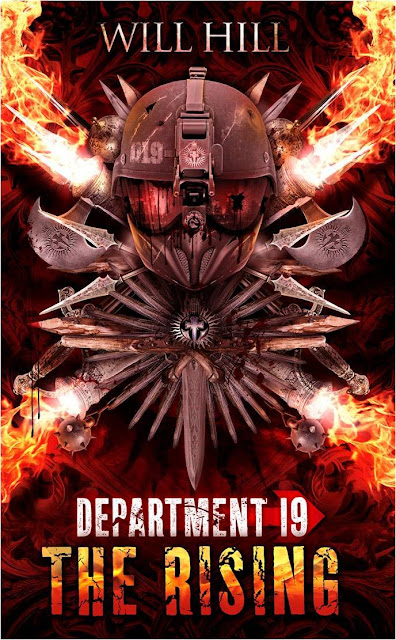 Sixteen-year-old Jamie Carpenter's life was violently upended when he was brought
into Department 19, a classified government agency of vampire hunters that was formed to
deal with a little problem . . . known as Dracula.
But being the new recruit at the Department isn't all weapons training and covert missions. Jamie's own mother has been turned into a vampire - and now Jamie will stop at nothing to wreak revenge on her captors. Even if that means facing down Dracula himself.

One of my favorite books last year (as is evidenced in my review) was debut author Will Hill’s DEPARTMENT 19. Both an urban supernatural thriller and an action-packed historical mystery; the book was a very clever novel that gave us back classic monsters and managed to enthrall me to no end.

I’ve seen one review already of the book and the reviewer likens the second volume to THE GODFATHER PART II, and I initially thought that was high praise indeed and wondered if I would have the same opinion. After reading it I can definitely see why the reviewer chose that particular analogy, since there are whole sections of the book that follow the path to success that Coppola’s masterpiece did and do so with a verve that was as uncompromising as it was entertaining. I have another analogy, but I’ll save that for later.

I can’t talk too much about the plot of the book since I’d rather not give any spoilers away, but I can tell you it picks up three months after the events at the climax of the first novel which took place on Lindisfarne. Jaime, Larissa and Kate are settling into life as Blacklight Operators, though they are missing the stalwart Colonel Frankenstein who was last seen dropping over a cliff edge in battle with a werewolf. The entire organization has become a coil, spring-loaded from the revelation about the remains that the enemy found at a covert base in the snowy Russian wilderness. They name the event that will inevitably follow as Zero Hour. It is mere months away, and Admiral Seward and the rest of Blacklight are attempting to prepare for the oncoming storm. Is that vague? Sorry, you have to read the book folks! :D

I’m a little stunned at the forethought Will must have put into assembling this book. If you like how Steven Moffat assembles the new SHERLOCK, then you will appreciate what Will has done with the narrative flow of his latest novel. Chapters jump around in time (sometimes weeks, sometimes hours, sometimes minutes) and concern different characters, but they always fuse together into a clever puzzle that leaves you NEEDING to keep reading and it never leaves you annoyed at being left hanging. I was pleasantly surprised by how an interrogation (one of my favoruite bits of the novel) takes place over the course of a few chapters, but it never stalls or stagnates and is woven into the fabric of the story quite fittingly. This was a feature of Will’s writing that I noticed in the first novel, since he seamlessly was able to connect the historical bits with the modern bits. Consider me doubly impressed here. Will takes about five or six different plot threads and runs with them all at once and come hell or high water you will follow him down the garden path simply out of the need to know where he’s taking you.

That destination is where my analogy to a Part II of a series comes into play. DEPARTMENT 19: THE RISING is a book I would liken to THE EMPIRES STRIKES BACK. Yes, I am aware how loaded that statement is, but it makes it no less true in my head. Without spoiling anything, I just would say that the reasons that you enjoy that film “the best” are on display here. Will has taken his characters, built them deeper boots to fill, given them umpteen problems to deal with (both professionally and socially), and made the interactions between them well executed and truthful. Teenagers are hard to write, they aren’t ALL ANGST all the time, but neither do they act like adults yet with reason and thoughtfulness (not that adults really do that either). In fact, Will’s balance of the youths in his story is very good. Jaime, Larissa, Kate and Matt all especially ring true to me since they freak out when you would expect them to and Jaime in particular makes some truly boneheaded, and hotheaded choices. Sometimes there are people there to rein him in and sometimes not, but it always sounds to me like how a teenager would deal with these situations. Hell, sometimes it sounded like how I would deal with a situation. Everyone makes abrupt choices in the passion of the moment, and it’s nice to see Will pay attention to that facet of humanity and display it in his characters.

The villains of this piece are explored even more here and with the turncoat of the previous book dealt with, we get into some very meaty historical information about the Rusmanov brothers and further windows into the life Dracula himself. Those portions are absolutely fascinating and I do hope that Will doesn’t stop giving us historical chapters in the future books since they are still a fantastic way to break up the narrative in present day and flesh out the overall arc as well.

The book is insanely riveting. On Saturday morning I picked it up and I was on page 100-ish, and by about noon I was rounding page 500. The pace is as clean as it was in the first book. Will had found a nice niche in the pacing of DEPARTMENT 19 and it really, truly worked. Well, in THE RISING he gets to turn that pacing up to ten! I simply could not stop reading and the more I thought “Just one more chapter.” The later in the day/night it got. In a nutshell, if you sit down with this book do yourself a favour and clear a little space in your day. It really is that good, and will melt your brain into a wondrous fiction puddle.

The latter half of the book has some crazy action set-pieces that were wholly exciting and well-written. The weapons, activities and executions of Blacklight operatives are able to be unabashedly on display here and so when someone uses a T-Bone or a UV-Grenade you can really sink into it this time since those items are under your belt so to speak.

Something I wasn’t expecting was how well certain scenes build tension. Will has been able to craft some really palm-sweating moments here and I found myself more often than not having to remember to breath. So expect that there are sequences where Will plays with your limits of tension and just at the right moments he goes for the jugular.

He is also the king of twists and revelations. There are some jaw dropper moments in this book that make the ones that impressed in the first book look like child’s play. I was jaw-on-the-floor stunned at least twice. If you like revelations, not to worry as they abound in this story.

Definitely one of the best titles of 2012, D19: THE RISING an absolute roller coaster of a book. Emotionally charged, terrifying, and what I term as a “Wee Hours” book that will keep you burning the candle late into the night. Just don’t let the candle go out, for who knows what’s lurking in the darkened corners of your bedroom.

If you’ve not read the first novel DEPARTMENT 19, then you need to pick that up ASAP, and while you are there you may as well grab the sequel and save yourself time since you are going to want to dive right in straight away.

The book comes out in Canada on April 13th, for those of you who are waiting for this one, that will be the day to hit the store. You can find out more about it and buy it through Harper Collins Canada HERE!
Posted by GunMetalBlue at 6:00 AM