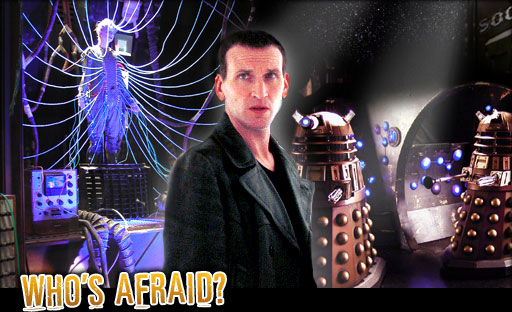 The 12th episode, being the first part of the two-part finale for Series 1 is a bit of an odd duck if you watch it standalone. It’s basically the lead up to the penny dropping about the who the main villain of Series 1 is, and what exactly the plot thread of Bad Wolf (a phrase that has shown up somehow in almost every episode) means.

Title BAD WOLF, the episode finds The Doctor, Rose and Jack on a space station that broadcasts game shows. Each in their respective shows: Doctor is on Big Brother, Rose is on The Weakest Link, and Jack is on What Not To Wear (even though that’s technically not a game show). Each quickly find that the penalty on each of the shows for losing is disintegration. While the Doctor, joined by Big Brother contestant Lynda, steps out of the “house” to find a root to the issue of what exactly is going on, Rose gets closer and closer to disintegration on the fast-paced Weakest Link show.

Like I said above, it’s an anomaly if you watch it by itself since it’s the prologue for the finale. It reveals Bad Wolf as the corporation that runs the space station, which turns out to be Satellite 5 from THE LONG GAME 100 years after the Doctor’s visit. As a result of that previous visit, the Earth stopped receiving transmissions, thus halting our worlds progress. It is also revealed that the villains behind the whole shebang are…dunh dunh dunh…the Daleks. More precisely a fleet of 400,000 Daleks. A New Dalek Empire. That’s about the size of it.

I think my point being that you should NOT watch this episode by itself. It will only make you yearn to watch the second half and the two really do work better as one 2 hour story.

With that said, I decided of course, on a double episode post to finish off the Series 1 Re-Watch.

So without further ado, I’ll talk about the final episode THE PARTING OF THE WAYS. 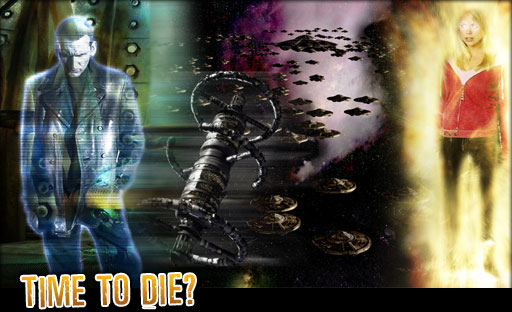 This episode begins with Rose, being threatened with extermination after having been transmatted (not killed as previously thought) to the Dalek Emperor’s ship. She is about to be exterminated when she shouts that they need her to give them info about the Doctor so they stop from killing her…info which she then proceeds to refuse to give them just as the Doctor materializes the TARDIS around her inside the Dalek bridge, saving her life. The Doctor, Jack and Rose step out onto the Dalek bridge, protected by the force field around the phone box to chat with the Dalek Emperor himself. It turns out that he escaped the Time War with his ship and has slowly been stealing human bodies and using their flesh and DNA to create his new race of Daleks. This is a notion that the Doctor finds laughable since the Dalek’s loathe anything remotely human as inferior. The Dalek Emperor revered as a god by his creations and the Doctor is secondly befuddled by a Dalek race that has apparently gotten “religion” after a fashion. This is a warped and twisted version of the Dalek race he has known his whole life, but it is no less dangerous. In fact, as the Doctor himself notes, they are all “quite mad” and a race of insane Dalek’s is not a good thing.

The first thing that jumps out at me here is that in the first half of the finale the Doctor was being helped by Lynda (with a Y) from his Big Brother house, and in the second half Rose meets her. It was hilarious to watch Rose (no less than 3 times) actually “sneer” at Lynda when she says she’ll help him do something. She reacts as jealously as she could and this is the first real indication that her motives towards the Doctor aren’t merely about adventure, time and space. This is the first time we see the inklings of “love” that will flourish as the series progresses. So in proper form she reacts to Lynda (and the Doctor’s admiration of her help) like a jealous lover would do, and it’s wonderful and realistic. One of RTD’s major skills is always the quiet, subtle beats in a script. The moments that you don’t really think about till later (or in this case on a re-watch), as they ring very true to Rose specifically.

After deciding that she’s not safe, the Doctor pulls a classic “Doctor trick” and sends her to the TARDIS to “get” something, the door locks and the TADRIS begins to dematerialize. While in transit back home a hologram plays where he tells her she’s not safe there and he had promised to keep her safe. He says let the TARDIS fade into memory on a street corner somewhere, and forget about it. This is one of those odd moments, that while it is entirely poetic, I often wonder if the Doctor assumed that strong-willed Rose Tyler was going to simply do as he asked.

Of course once Rose is home she begins to fret. Her mother and Mickey attempt to comfort her but to no avail. She feels useless and that the Doctor could be dying 200,00 years in the future and there is nothing she can do about it. It’s not until the words Bad Wolf are written in chalk and paint graffiti at a local playground that she begins to put it together as a sign that she needs to try to get back to him. Believing that if she can get a panel open she once saw open on the TARDIS console (which the Doctor previously told her was the heart of the TARDIS) then perhaps she could get it to home back to where it had come from. Of course once they get open the panel the light/heart of the TARDIS goes into her eyes, the door shuts and zips right back to Satellite 5 again…with a “changed” Rose in tow.

The Doctor established that he could create a wave that would destroy the Daleks, but it would also destroy everything in the vicinity including them. Jack, Lynda and Co. attempt to fight off the Daleks to buy the Doctor time to do his, during which Jack is exterminated. The Doctor cannot bring himself to use the wave since it will kill everyone…but also because he can’t even bring himself to do in the Daleks. This is a turning point in the PTSD-Doctor from the Time War. He is leaps and bounds from the self he was back in DALEK when he would have killed the thing without batting an eye. This is the first time we see him starting to accept that war is war and this is something else. That IF there is a chance to get out of this without the deaths of thousands, even if they ARE Dalek, then he needs to take that chance.

When Rose arrives the Doctor realizes what she has done, having looked into what is essentially the untempered schism (a right of passage that only Time Lords can do seeing into all of time and space at once) and that “no one is meant to do that” he wants to help her but before he can she basically “unmakes” the Dalek fleet, up to and including the Emperor himself. I love that part, her power is unmatched and she basically does something the Doctor could not bring himself to do a few moments earlier. She also “makes” life by bringing Jack Harkness back to life…which funnily enough makes him immortal, but that’s another story.

The episode ends with the Doctor kissing Rose to absorb the time energy into his body, and then sending it back into the TARDIS properly. Sadly, this has triggered the death of the 9th incarnation of the time lord. His body is going to regenerate and he explains this as quickly as he can to Rose, who doesn’t really understand. Then it’s all blasting yellow regeneration energy from arms and head…and Christopher Eccelstone bows out of the role he pioneered (in the new show anyways), leading the way for the 10th (and most popular) Doctor, David Tennant.

This episode has a number of emotional moments, I thin one of the top we all agree is Eccelstone’s final scene where he rather matter-of-factly tells Rose he is going to die. But to be entirely honest with you, it was earlier where my emotional heartstrings got plucked. There is a quiet scene during the part of the episode when Rose is stuck on earth when Jackie Tyler can’t understand why Rose wants to go back and help. Rose looks at her mother and says “Because HE would have.” And at first you assume she’s talking about The Doctor, but no…she’s talking about her father, Pete Tyler (the inventor, who died when she was just a baby). She says, “he took me there mum. I met him, on the day he died. The Doctor took me back to see him.” And Jackie is disbelieving at first “Stop it. Don’t be stupid. Stop talking like that.” And with tears streaming down her face Rose says to her mum “Remember when dad died? There was a blonde girl who stayed with him till the ambulance arrived? You remember. It was me mum, I was there with him!”. Oh god, I blubbered like a little kid during that scene. It’s also the lynch pin to Jackie deciding to help her daughter and help the Doctor. That it’s because Pete would have done. He would have TRIED, no matter how silly the idea was.

My second fave beat in the episode, is of course David Tennant’s first scene. I flat out love his line of dialogue. “Hello! Oo. New teeth. That's weird. So where was I? Oh that's right. Barcelona!” and he cracks his trademark grin. It’s probably the BEST entry of a Doctor ever, and is only really rivaled by his own exit 4 years later.

Now this is where things get interesting. The Re-Watch continues, but the next episode is a with a new Doctor in tow and new adventures. I start Series 2 with the next episode (and the first full ep to feature David Tennant) THE CHRISTMAS INVASION. So stay tuned!
Posted by GunMetalBlue at 10:06 AM