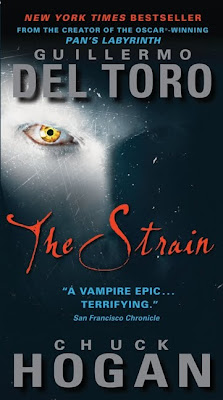 Ephraim Goodweather, heads up the Canary Project for the CDC, an early response team designed to handle unexpected biological events. When a Boeing 777 lands at JFK airport with only four survivors Ephraim’s team is called in to process the scene. What he discovers on board defies scientific understanding, an unknown pathogen has consumed the dead passengers converting their bodies into something he has never seen before.

Across the city Holocaust survivor Abraham Setrakian watches the news of the mysterious plane with mounting dread. He knows in his heart that an ancient vampiric evil has just come to New York, one that he has met before. When the bodies of the dead passengers vanish from morgues all across the city Abraham’s worse fears are confirmed.

Soon vampires stalk the streets of New York, their numbers swelling with each passing night. Their thirst is unquenchable, their desire for blood undeniable. As events unfold at a blistering pace Ephraim and Abraham rush to contain a seemingly unstoppable viral outbreak before it breaks out of the city and consumes the entire country.

Reading THE STRAIN by co-writers Guillermo Del Toro and Chuck Hogan was a bit of a surreal experience for me. Broken down into its component parts the book had me shaking my head in frustration at almost every page. And yet I couldn’t stop myself from reading it, despite its glaring structural problems. When the shit hit finally started to hit the fan THE STRAIN had me hooked.

At its heart STRAIN is essentially the logical continuation of Del Toro’s work in the second BLADE movie, with vampirism being portrayed as an unstoppable disease vector instead of the overly fetishized wretched love story that has become the norm today.

Tragically THE STRAIN’s greatest strength is also its greatest weakness. The book is impeccably well researched, stupidly well researched even. Researched like the brown nosing kid in your math class who throws his hand up every time the teacher asks a question. Because it’s not enough for him to know he’s smart, he needs to make sure every other kid in the class needs to know it too.

Right from the get go, this dedication to sharing knowledge kills the book’s tension and momentum. I don’t need to know every aspect of how an airport functions, or the history of uniforms in the CDC or the million other useless pieces of trivia that are thrown my way. I applaud the writers’ devotion to getting it right but not at the expense of the story they’re trying to tell. By all means feel free to drop some of the more salient and interesting pieces to me, but stop wasting paragraphs assuring me that all this stuff the characters are doing is 100 per cent procedurally correct. Because when I start finding the massive technical inconsistencies that crop up in later pages it’s only going to make me resent you for trying to pass yourself off as something you clearly aren’t.

But where the commitment to research works for the book, and not against it, is in its analysis of how vampirism as a disease would really work. I’ve always appreciated the scientific reimagining on the origins of classic movie monsters. While some people might bemoan the changes I find that attempting to look at these fantastical creature in a realistic manner actually makes them more frightening. STRAIN’s in-depth examination of the physiological and psychological metamorphosis of vampire victims is insightful, interesting and realistic. Well, as realistic as a disease that transforms your entire being practically overnight can be. But, bottom line, it’s clear the writers have put a LOT of thought into how this strain of vampirism works and for a reader I really enjoy that.

(It’s not perfect of course, there are still some elements of the mythical kicking around Del Toro and Hogan’s vampires, for example they can’t cross running water without being invited in by someone. So the whole reimagining doesn’t hang together quite as well it should but it’s a valiant effort nonetheless.)

One of THE STRAIN’s biggest failings are its characters. This book is populated almost entirely by paper thin caricatures and one dimensional stereotypes. Seriously to be a woman in this book is to doom yourself to being marginalized and otherwise unneeded. The books two female characters, Nora and Kelly, only gain any depth or personality through their interactions with stereotypical science hero, Ephraim. Otherwise they’re written off like needy flibbertigibbets who are better seen and not heard. In particular, it frustrated me that Nora is supposed to be a Type-A, high level scientist like Ephraim, doing nearly the same job, but is reduced to being a quiet tag along whose only real value is to babysit Ephraim’s kid because he’s too busy saving the world to do it himself.

More personality is given to victims who have been bitten and are undergoing the vampiric metamorphosis as they ruminate about the changes happening in their lives and how it affects their relationships with their loved ones. Seeing that Del Toro and Hogan have the ability to write characters as more than caricatures is disappointing since they obviously didn’t extend this same approach towards fleshing out their lead characters.

About the only character who comes off as well rounded individual in this book is that of aged vampire hunter Abraham Setrakian, although even he isn’t free from the curse of poor character development. Setrakian is revealed to have fought vampires in the 1940’s when he was a prisoner of the Nazi concentration camps. And while I can see why it might have seemed like a good idea to tie Setrakian’s personal backstory into the fertile backdrop of WWII all it really does is cheapen the tragedy of those who suffered and died at the hands of the Nazi’s in those horrible places. Surviving those concentration camps was a nearly impossible act in and of itself, somehow imagining that one could do so and prepare an elaborate plan to destroy an ageless vampire at the same time is simply ludicrous.

Basically THE STRAIN is an action movie in novel form. The book is structured like a fast paced thriller, everything happens so quickly that it’s impossible for the good guys to get a handle on events until after the catastrophe blows up. You can’t help but think that a five minute breather and some well-placed phone calls would give the heroes the opportunity to mitigate the worst of their problems. This high octane approach effect might create tension in a movie, but in a book it just showcases the instances where rational thought has been asked to take a back seat in order to keep the story moving forward.

As a result, logical inconsistencies are rife throughout THE STRAIN. I find it impossible to believe that in a world of SARS, bird flu and H1N1 that when an entire plane of people are killed, without any easily identifiable reason, that a little sabre rattling from an eager lawyer will get the survivors released without any institutional resistance. Governments are simply far too paranoid about disease and potential pandemics to let potential carriers waltz out the front door of a hospital without trying to stop them.

But despite all my bitching I really enjoyed this book. It’s well written, well thought out and well executed. Yes, there are an extraordinary amount of frustrating, head pounding against the wall brain farts but for whatever reason THE STRAIN seems to transcend its failings and remain an interesting, almost captivating book. I’m not sure I quite understand it myself. But there it is.
Posted by Chris at 9:51 AM