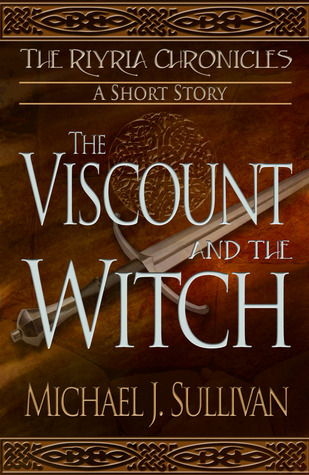 Eleven years before they were framed for the murder of a king, before even assuming the title of Riyria, Royce Melborn and Hadrian Blackwater were practically strangers. Unlikely associates, this cynical thief and idealist swordsman, were just learning how to work together as a team. In this standalone first installment of The Riyria Chronicles, Royce is determined to teach his naive partner a lesson about good deeds. Join Royce and Hadrian in this short story (5,400 words) about one of their earliest adventures.

In the short fiction piece titled THE VISCOUNT AND THE WITCH, Ryria Revelations author Michael J. Sullivan, has crafted what I would term as a nice little fictional anecdote.

Laid out as an incident early on in the career of our favrouite thieving team, and long before they even were referred to as Ryria, this little tale is short, but nicely to the point. As to not give anything away I won’t post any story points, but I will say that if you enjoyed the Ryria book, then this will be right up your alley. In fact, even if you haven’t read the Ryria books you can read this as it takes place years before, and the Ebook actually comes with a sample from the first part of the Orbit THEFT OF SWORDS omnibus to read as well. Not bad at all. If I had any complaints, it would be that it felt a tad too short. Like just as things got going, it was over. I get what Michael was doing with it, but I can't help but be a fanboy and wish I'd gotten more Ryria.

That said, for a tale as short as this it is really nice to see the personalities of both Hadrian and Royce front and center, as is their great banter.  I loved this story and it took all of about ten minutes to devour so it was quick and simple and really whet’s my appetite for the final book in the series. Can’t wait! An enjoyable romp with your favourite thieves.

Posted by GunMetalBlue at 7:48 AM

Email ThisBlogThis!Share to TwitterShare to FacebookShare to Pinterest
Labels: Michael J. Sullivan, The Ryria Revelations, the viscount and the witch