Short Story Review: The Butcher Of Anderson Station (A Story of the Expanse) - James S.A. Corey 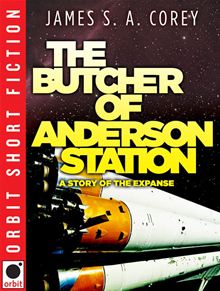 A new story set in the world of The Expanse. One day, Colonel Fred Johnson will be hailed as a hero to the system. One day, he will meet a desperate man in possession of a stolen spaceship and a deadly secret and extend a hand of friendship. But long before he became the leader of the Outer Planets Alliance, Fred Johnson had a very different name. The Butcher of Anderson Station.

This is his story.

I read James S.A. Corey’s (pen name of author’s Daniel Abraham & Ty Franck) LEVIATHAN WAKES early this year and it really knocked me out. A great action-packed space opera filled with heroes, villains and grey’s. Political entanglements, war, and even xenophobic mysteries abounded. In short, I loved it.

So I jumped at the chance to read the short piece they released titled THE BUTCHER OF ANDERSON STATION. Now if you have read LEVIATHAN WAKES, then you’ll know whom this story is about. If you haven’t read it, this story concerns one of the main characters named Fred Johnson, and an action that gave him a certain name.

I wondered about this story when I was reading the first novel, and have been rewarded with a short piece that is really well written (as good as anything within the original narrative), completely engrossing (a tall order for a short fiction piece), entirely informative (giving me far more insight into Johnson) and brutally honest.

The universe in the books of the Expanse series was already quite well fleshed out, so here we have an enigmatic character with a past and we get to look into that. Told by switching between the events that happened on Anderson Station, and a more recent conversation between Johnson and some mysterious operatives, THE BUTCHER OF ANDERSON STATION is a really fun, and interesting tale.

I’d be a complete idiot if I neglected to tell you that all this short piece did was get me REALLY excited to read the second book in The Expanse, CALIBAN’S WAR which comes out next year. Seriously, the wait till June is going to be brutal as I simply don’t get excited over much sci-fi, but this series jumped to the top of my list of faves quite easily.

If you enjoyed LEVIATHAN WAKES, then this little nugget of a tale will truly satisfy you, and if you haven’t read the first book yet, what are you waiting for? It was easily one of last years best sci-fi debuts!

Posted by GunMetalBlue at 9:01 AM