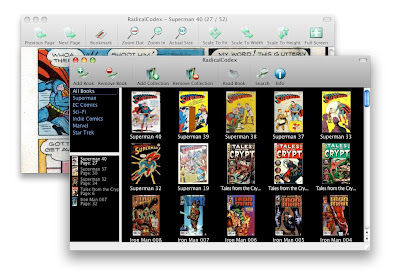 (My apologies if somewhere out there on the internets someone else has posted an identical solution. There’s a lot of opinion and information out there on digital comics and after a while it all seems to blur together.)

I’ve been reading 95% per cent of my comics digitally for three months now. And for the most part I’m pretty damn satisfied with the experience. Oh, there’s definitely times when I’m buffeted by waves of nostalgia but those moments come few and far between.

The convenience factor is a huge plus. I’m loving that every week I can download all the comics I’m interested in directly to my iPad without leaving the comfort of my desk. No more striking out halfway across the city, braving inclement weather and rushing to get back to the office before my lunch hour is over.

Guided viewing on the iPad has changed how I read comics. Comic books are now more of a cinematic experience, like looking at elaborately crafted storyboards. And if the books are laid out in a particularly unique way I always have the option of toggling back and forth between the guided and the standard view depending on what I’m looking for.

The colours are gorgeous. No more faded colours in older books or shine from overly glossy paper in the newer ones. Instead I’m treated to bright and vibrant colours that look as if the colourist just put the finishing touches on mere moments before I arrived. Fantastic.

Pricing continues to be an issue though. And this is the complaint I hear most often. Currently the vast majority of comic books put out by the Big Two are released digitally online the same time as they show up in your local comic shop. After a few months the price might come down by a buck, but on the whole the differential isn’t that great. Which, if you’re like me and you don’t have the patience to wait three months to read the latest issue, can rankle a bit. Why should I pay the same price to read a digital comic book as I would pay to buy it in a store? Especially since I’m not left with a physical product at the end.

Well, the short answer is that comic publishers are keeping prices the same so as not to undercut the bricks and mortar stores that sell their product. During this transitional period, and I’m blindly assuming here that digital comics are the way of the future, publishers can’t afford to undercut stores because the stores are still responsible for selling the vast majority of their product (pure speculation) and the last thing they need is to get into a pissing match and possible boycott scenario with one of their biggest income streams.

So what’s the answer? How do you protect the financial viability of the small businesses that keep this thing running while still catering to a growing demand from consumers?

Much like iTunes allows you to rent a movie for a certain period of time, before erasing it from your hard drive, let comic book readers ‘rent’ a comic book for .99 cents for up to, say, a month. When that month is up the comic book goes poof. Hell, you can even put a little pop up notice that comes up at the end of your rental copy, asking if you’d like to pay the difference between the rental price and the regular price so you can outright buy a digital copy.

Readers who enjoyed the story enough that they think they might read it again can buy it then and there and those on the fence can simply led it fade away.

This way, people who want to read stuff digitally, but are put off by the high price and their lack of ownership of a physical product get a lower price point to entice them in. I know personally that I’m much more likely to sample a wider range of books if I know I can do so at a cheaper price.

Adding a 99 rent option allows people to sample digital comics on the cheap, but it handicaps them because they don't get to keep a copy for themselves, either digitally or physically.

Readers will ALWAYS have the option of buying a digital copy outright at the same price point that the books sell for now. And bricks and mortar retailers get the opportunity to remain competitive from a costing standpoint. Everyone wins.

As digital consumption becomes increasingly popular the fate of local comic shops is up in the air. Take a look at the music industry. Chain stores all over the world are scrambling to diversify and rejigger their business model. If they’re having trouble with the new digital reality I have no reason to believe that a loose network of mom and pop comic retailers will be able to weather the same storm.

I fully appreciate the need for comic publishers to support their retail partners. But I think it’s dangerous to think that they can justify keeping digital comic prices at retail levels forever. Eventually, change will come and it’s in both parties best interests to start looking forward to what comes next.