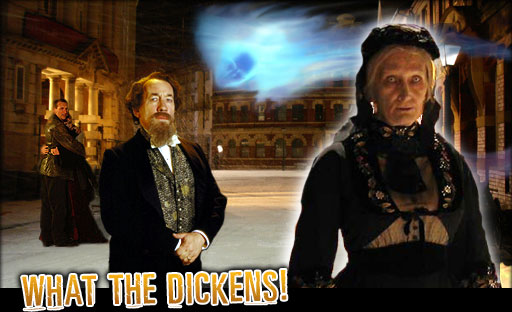 How can you not love Dickens?

A DOCTOR WHO story that takes place on December 24th to boot!

There really are some hidden gems in Series 1 of DW, and I think that the Mark Gatiss-penned 3rd episode THE UNQUIET DEAD is one of them. No, not because it pulls at any particular heartstrings, or because it stars Simon Callow as Charles Dickens (a role he recently and briefly reprised in the Series 6 finale THE WEDDING Of RIVER SONG), but because it was a good old fashioned period ghost story.

RTD-era DW usually began with a 3-episode pattern. First Episode: Modern Day Earth, Second Episode: Future Earth or other planet or space station, Third Episode: Period piece set at some point in Earth’s past. This being the latter there were lots of lustrous costumes, sets, and special effects to be had here.

The story begins with a funeral home in Cardiff (Wales) having problems with zombies. The dead rising and walking and attacking. The Funeral home director, Mr. Sneed, is aware of it but is trying to keep it under wraps as to not discredit his business, and he uses his maid Gwyneth (Eve Myles in a role that would see her end up as Gwen on latter spin-off TORCHWOOD) who is psychic to find the missing walking dead. One shows up at a show that Dickens himself is putting on that night and the author ends up involved as well. Enter the Doctor and Rose and all hell (or the rift) breaks loose.

This is the first time we see the evidence of, or even hear ABOUT the rift in Cardiff that allows alien things through. This particular theme not only runs as a thread through future DW episodes, but also is the basis for the TORCHWOOD spinoff as TORCHWOOD 3 is based in Cardiff BECAUSE of the rift.
I am a big Charles Dickens fan, so when the Doctor gushes about how big a fan he is I can’t help but smile. This theme is another that runs through DW. The Doctor has met many famous authors and playwrights and likes to let them know that they are well received in the future. Agatha Christie, Shakespeare, and even Vincent Van Gogh have met him and been so informed. I truly like that. As an artist it would only bolster their career and drive to know how enduring their works were.

Anyways, I got away from myself there. The ghosts! The ghosts are actually the Gelf, creatures from the rift who CLAIM to be few in number and as higher beings they were supposedly decimated by the Time War. This notion, and the doctor’s subsequent desire to see them helped even at the expense of them using reanimated corpses (something Rose is vehemently against) to further live, is the first time that we see The Doctor make a horribly blind decision. This is the first decision that is made by an old soldier suffering PSTD (Post-Traumatic Stress Disorder) from the time War. The guilt over what transpired not only to the Daleks during the Time War, but also to other higher beings is too much and the Doctor is going to help blindly come hell or high water, even if it is a poor decision (which Rose knows it is from the outset). I think that is a key reason why this episode is important for the whole Series 1 arc, as it is the first time that rose makes a call that is right and is nearly shunned for it. The Doctor will later realize his faith in his companion will be much more valuable than he could have imagined back when he saved her from the Autons.

I do also believe that this is the first mention of the Bad Wolf theme in Series 1 (I think), and though I’ll not reveal it here, that is something that will be a major player down the line. It always mystifies me that RTD had the forethought to put so many little nods to overall continuity just into random, almost throwaway sentences in each episode. A sign here, a comment there, but if you were paying attention ...you understood that something important was mentioned. This works on an even BETTER level on a re-watch, because you know all the nods, and you can watch for the cues and really get into the meat of the episodes’ writing.
A solid period piece episode and a rollicking good ghost story to boot. THE UNQUIET DEAD is Mark Gatiss’ first contribution to NuWho and was not his last, though I am beleaguered to try to sort out if it was his best. It is certainly up there with his best stuff.

Lastly, I feel the need to point out that both my girlfriend and her sister pointed out that they don’t love Eccelstone as the Doctor. My girlfriend having seen only Tennant and Smith and her sister only really Smith, they have not really been exposed to 9 like I have. I had to tell them to hang tight, that just like the other incarnations, it takes a bit for a Doctor to get his feet and grow on you. I am therefore patiently awaiting them watching episodes like FATHER’S DAY, THE EMPTY CHILD, THE DOCTOR DANCES and THE PARTING OF THE WAYS which were the ones that REALLY endeared me to the 9th Doctor. We’ll get there in the re-watch folks, we’ll get there.


Next Time:  ALIENS OF LONDON
Posted by GunMetalBlue at 8:49 PM