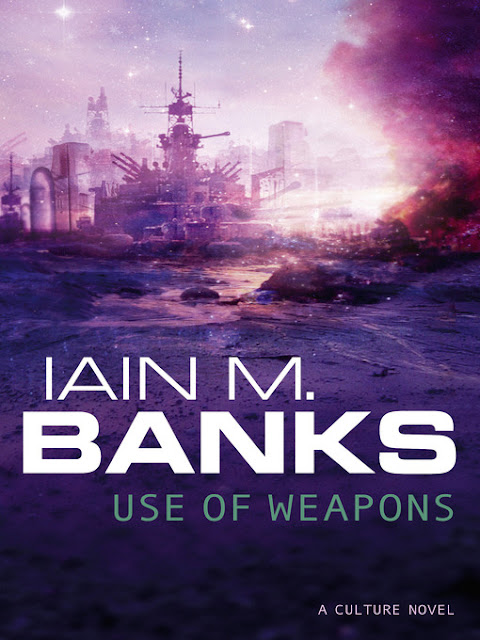 The man known as Cheradenine Zakalwe was one of Special Circumstances' foremost agents, changing the destiny of planets to suit the Culture through intrigue, dirty tricks or military action. The woman known as Diziet Sma had plucked him from obscurity and pushed him towards his present eminence, but despite all their dealings she did not know him as well as she thought. The drone known as Skaffen-Amtiskaw knew both of these people. It had once saved the woman's life by massacring her attackers in a particularly bloody manner. It believed the man to be a burnt-out case. But not even its machine intelligence could see the horrors in his past.

Iain M. Banks, in his 3rd Culture novel USE OF WEAPONS, has crafted a story that is so completely different from the previous entry (PLAYER OF GAMES) that I was very pleased. It’s really nice when an author creates a universe and then actually takes the time and care to tell unique stories within it.

What’s that? You’re confused? Me too. We are lost together.

USE OF WEAPONS is a tale that is told from two different (seemingly disparate) narratives, each with their own POV. Both work for Contact Special Circumstances within the Culture, Cheradenine Zakalwe who was born outside the Culture but works for them, and Diziet Sma who keeps recruiting and acting as handler for him as he spends time keeping less civilized planets in line or under control. There is also, thrown into the mix a particularly violence-prone Drone named Skaffen-Amtiskaw. All these three characters mix in various ways and the narrative itself is completely non-linear. Sma’s timeline seems to movie pretty straightforward for the most part, while Zakalwe’s seemingly moves backwards to the point that you can never be completely sure at what point in his timeline you are reading about.

I don’t think I like these people, but I don't think we are meant to.

Having two protagonists that are essentially unlikeable is a brave move. I’m not saying they are easy to hate or anything, just that they make cold, calculating decisions and are kind of hard to like is all. Both Sma and Zakalwe have sordid pasts, and those pasts slowly come to light as the narrative moves forward/backward ( < ---see what I did there?) and as they peel back layer after layer you will find yourself with your jaw inching its way further and further towards the floor. Skaffen-Amtiskaw is kind of the far end of what a Culture Drone can be, in the violence area, so far as to make Sma herself quite abhorred at more than one point in time. I liked that, as I feel that the Drones and Ships are the best part of these books, and Mawhrin-Skel in PLAYER OF GAMES was sneaky, untrustworthy, violent-if-pushed and ultimately endlessly amusing. Skaffen-Amtiskaw on the other hand is funny and yet purely LETHAL. Again, another aspect of the Culture universe as an exploration in diversity.

Can you hear that sound and smell that burning? That’s your brain melting.

As you round the halfway point and we dwindle into Sma’s future but move further into Zakalwe’s past you start to realize that things aren’t right. Something wonky is going on and certain aspects are starting to deeply unsettle me. In the final chapters of the book you are kind of hit hard with a few revelations and each successive one serves to change not only your opinion about what is going on, but also the physical nature of the novel itself. It twists and loops around so much that the only thing my brain could do in response was melt down. Stunned and more than a little unsettled I put the book down. My first thought was “That was messed...up.” and then my second thought a few hours later was “Man, that was significantly brilliant, just wholly messed up.” The first analogy that popped into my head was the film DONNIE DARKO, not because the narrative was a certain way or the story was similar or anything. It’s more that the way I felt after watching that movie was similar to how I felt upon finishing USE OF WEAPONS. I was really impressed and really horrified at the same time.

Worthy of praise? In spades!

A singularly difficult book to read and digest, but also a book that I can understand as being one of the author’s best in the series and worthy of the praise heaped upon it. I can honestly say that I enjoyed the book a bgreat deal, but would never consider it an easy read. If you like Bank’s Culture novel you will like this, just be prepared for a scattered and bizarre narrative.


Posted by GunMetalBlue at 6:56 AM

Email ThisBlogThis!Share to TwitterShare to FacebookShare to Pinterest
Labels: iain m. banks, orbit books, the culture, use of weapons