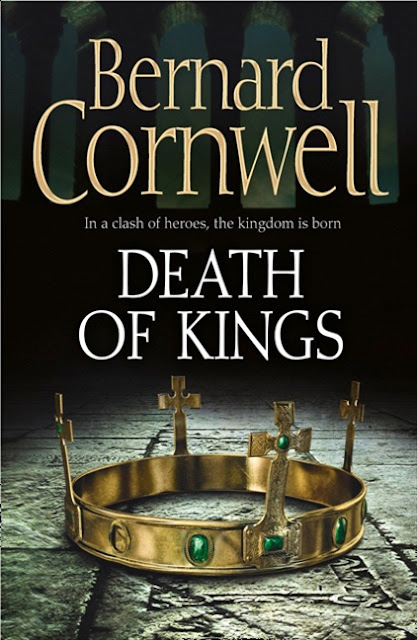 Bernard Cornwell writes various series and even a few standalone’s here and there, so 2009 was the last time that we saw our favourite Danish/Viking-raised Saxon warrior (in pious King Alfred’s service) in the 5th book THE BURNING LAND.

The 6th (and penultimate) book, THE DEATH OF KINGS, takes place not too long after the end of the 5th. Uhtred has once again been victorious in Alfred’s service defeating Haesten at Baemfleot, but his service can make a man pretty poor (in comparison to a raiding Viking anyways). Uhtred begins this novel living just north of Wessex in Mercia with only a small crew of men and not enough money for food or weapons. Aethelflaed is in a nunnery in Wintancaester, the Danes are again massing in the east with an eye for Wessex, and Alfred himself lays close to death. Uhtred is attacked, and then tricked by various forces of Dane’s and Saxon’s, some of which are working together. The one thing that stands out so much in this pre-England Britain is that ANYONE will switch sides…for the right price and for Uhtred, living in such a land and adding his reputation to the mix is dangerous indeed.

The novel concentrates on Uhtred attempting to get to the bottom of various betrayals, prophecies, and collusions that seem to be ripping even the stalwart stronghold of Wessex at the seams. Armies are amassed that are larger because of those collusions. Uhtred has to deal initially with the death of Alfred (who is indeed the Death of King from the title) and then the subsequent power vacuum that is created as Uhtred tries to help Edward (Alfred’s son) keep the throne of Wessex from Aethelwold (Alfred’s elder uncle who HAD been in line to the throne before Alfred took it).

All the Cornwell-isms are here and properly represented. Stalwart heroes, nasty villains, dastardly betrayals, and grand triumphs. One thing that these books always have is Uhtred going the opposite way of his superiors advice, usually to great fun and success. Case in point in this novel Edward tells Uhtred “Don’t provoke the Danes!” and at the end of that chapter Uhtred (our narrator) says “So I went to provoke the Danes” and I always liked that. I loathe when I read a book where a superior has told someone to do something stupid just so the plot will trap them in an interesting situation to get out of. Which is why I like that Uhtred abhors authority and more often than not completely ignores those figures. It’s also probably why I love Uhtred so much as a protagonist.

Cornwell’s success with this series is not just a readability, and a quick pace (both of which are aspects to all his books), but also in what he infuses into his characters throughout. Though there really aren’t any gray characters persay, he still has a talent at telling us someone is a villain, then having Uhtred interact with them and find things he likes. Haesten for example is personable and even jokey with Uhtred, but there is an underlying tension to their conversations that always feels clever to me, since the two inevitably want to kill each other.

I should note that though the book is as ridiculously enjoyable as you’d expect it to be, it is well evident that this is the second to last book in the series. Since this book deals with the death of Alfred the Great and the first year or so of Edward the Elder’s reign (Edward was, I believe the first person to rule a united England [Wessex, Northumberland, East Anglia and Mercia]) it is clear that we are setting the stage for the last book, where Edward’s reign will be secured and peace has a chance to return. So the book itself has a bunch of skirmishes, but nothing that could be called a full battle and while that is fine by me, some people might have come to expect a great battle at the end, and you won't really get that here. Cornwell is likely holding that out for the final book. For me that was a nice change of pace though. So that bit of orchestra tuning before the symphony is performed, that is what this book is. Luckily I love that part of a symphonic performance since I know it’s all the instruments preparing and getting into position for the main event. The last book should be a spectacle if the build up is any clue.

Have you read the other Saxon books? Then I am convinced you will be right at home with the latest volume. I certainly had a blast reading it, but then again I know when I settle in to read a Bernard Cornwell book that I am in for a treat.

The unequivocal king of historical fiction, Cornwell’s latest brings you all the war, action, politics and legendary characters that you could want in a novel . A total triumph and an astounding continuing look at a pre-England Briatin and just how a Kingdom was forged.
Posted by GunMetalBlue at 6:31 AM