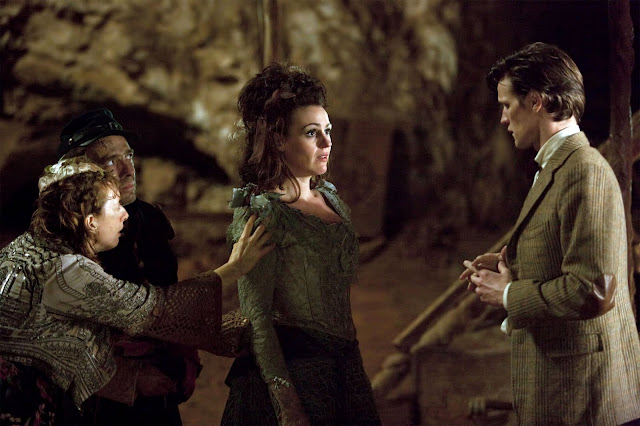 I’d like to do this review justice, but it will be hard not to fanboy-gush, so bear with me.
Also, please note that if you haven’t seen the episode yet….stop reading. Right now. It would be damn near impossible to review this episode without spoilers, so be warned there will be such below. I’d also really rather everyone who sees the episode watches it fresh with no previous info ahead of time. Nothing spoiled.
So there, you have been warned.
The 4th episode of DOCTOR WHO this season, titled THE DOCTOR’S WIFE, was written by none other than fantasy author, DW fan extraordinaire Neil Gaiman. We heard mention of his episode last season, but at the last minute they pulled it and decided to move it to Season 6, causing Gaiman to do a bit of a rewrite. At the time this happened I didn’t get it, but I think I truly understand now why it was moved. The subject matter of the episode is such that requires loving attention of the audience, and last year we spent most of the season concentrated on Amy and the Pandorica ect. It would have been totally lost in all that. Here we have a new season, and one where a future Doctor is still in mortal peril somewhere down the line, Amy is Schrodinger-style preggers but early days yet, and the time is ripe for an episode within that quiet time to tell a story about a madman, and his box.
Neil Gaiman has written what can only be described as a love letter to DOCTOR WHO and its mythos. He has come up with a clever idea that will show the Doctor as bare bones as we’ve yet seen him (Matt Smith’s Doctor that is). This episode eats at the core of what it is that makes the Doctor so lonely, and what it actually means to be the Last of the Timelords.
The Doctor gets a message from what appears to be another timelord, a living one! So the TARDIS crew head in search of it, but it takes them out of the Universe and into a bubble on the outside of it, in which is a spaceship graveyard…that seems to have the remnants of many TARDIS’s. There are patchwork people living there, and a deep booming voice controlling things as well. When the Doctor and Co. arrive though, they not only find things to not be as they thought, but that his own TARDIS’s  matrix has been drained out of her.
It’s not until a little while later that you realize what has happened. These patchwork people are being used as receptacles by the sentience of the junkyard/graveyard to implant TARDIS matrixes into, and Idris (played exquisitely by Suranne Jones) is where the Doctor’s TARDIS has gone. As the episode plays out, the Doctor becomes aware of the fact that Idris is a human embodiment of his ships’ personality and things just get amazing from minute to minute. They argue, they make jokes together, she ponders a name (he’s called her Sexy in the past) and she knows…well pretty much everything. She also swears that it was actually SHE that stole herself a timelord, and not him who stole a TARDIS at all. That was charming indeed.
All the Neil Gaiman staples are represented here: Patchwork people, monikers instead of names (Uncle, Mother), shadows and creepyness and even the dialogue rings true to Gaiman’s style and I loved every second of it. Gaiman also writes the Doctor VERY well. As a fan I am sure he has learned his mannerisms, the quirky nature of our intrepid Gallifreyan seems to fit like a perfect puzzle piece with Gaiman’s whimsical, scattershot writing.
The lost in the TARDIS corridor stuff with Amy and Rory stuck in a kidnapped TARDIS was fun and spooky at times…but they kind of killed Rory (Kenny) again…but I give Gaiman a pass on that since he wrote it before they ever killed Rory in the first place last season. Michael Sheen, it should also be mentioned, does a great job as the disembodied voice/sentience that likes to kidnap and drink TARDIS energy.

Oh, and Idris sending mental messages to Rory was pricelessly hilarious.
I think what steals the show though is Matt Smith and Suranne Jones scene in the TARDIS near the end. This is the first time the Doctor really reveals a deep, heavy emotion and it’s so well done and yet so simple that I can’t help but be in awe a little.
This is probably in my top 3 favourite episodes of the Matt Smith-era (along with THE ELEVENTH HOUR and VINCENT & THE DOCTOR) now. Neil Gaiman, a self-professed fan of the show, has written a wonderful episode that with a fairly simply story gives fans an hour of television that serves to remind us just why it is that we watch this show.
Posted by GunMetalBlue at 9:10 AM