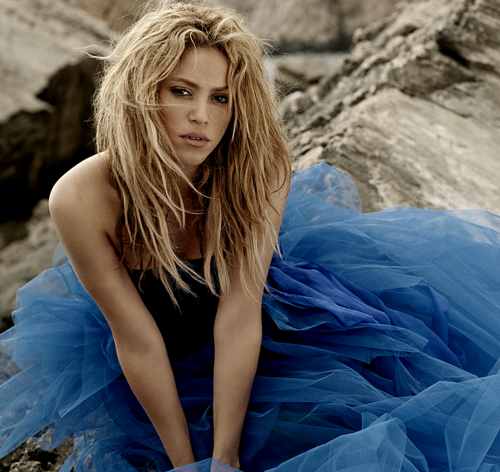 When I was fourteen and the world of music consisted of angry 90’s grunge rock, and various forms of hip hop and metal I found I needed something more. My parents divorce and my family unit crumbling around me caused me to retreat into myself and become closed, and shut off. Angsty music like Rage Against the Machine, or Soundgarden and NIN only went so far as helping me with an outlet to my teenage upset, but it didn’t fix the issue. Then one day I bought Tori Amos’s LITTLE EARTHQUAKES, and Kate Bush’s HOUNDS OF LOVE in one day. Here was a softer, though still angsty, vocal style of music that not only allowed me outlet but made me feel better. Here was a type of music that not only vented the grumbles of a teenager, but laid a salve on them and taught me that things would not only be alright, but that they could be amazing and lyrical and even magical (That's likely the fantasy nerd in me who thinks that).
I credit those women with giving me an opening to enjoy an eclectic taste in music and allow music to bring me a joy I didn’t know one could find in music. You will often find me with my eyes closed at a concert just drinking in the sound and visceral live experience. My girlfriend found it weird the first time she saw me at a concert and thought I wasn’t enjoying it. Now she knows I was enjoying it, and it’s just that sometimes I like to let music permeate me rather than bounce around madly dancing or singing along.
So, fast-forward to adulthood. I am no longer angsty, nor am I lost in a pool of despair regarding my parent’s breakup fifteen years later. I DO however, still enjoy vocal-aspected music of a contemporary variety, and one of my favourites is the one I am going to talk about today.
Shakira.
Now, I didn’t get into Shakira when everyone else in North America discovered her, that would be when the track “Whenever, Wherever” from her 2001 English language debut LAUNDRY SERVICE came out. In fact, that is probably my least favourite song by her, and that’s probably because the Spanish language version “Suerte” just sounds better to me. 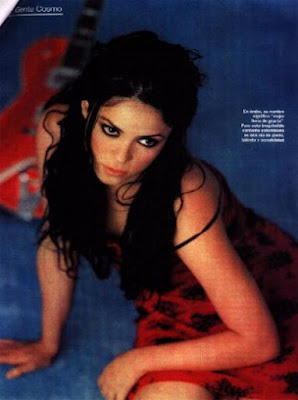 Nope, my first experience with the singer came from a completely random occurrence in 1997. I used to wake up at the crack of like 4AM to listen to an internet radio station that played obscure downtempo and house music called 1groove. Well one morning my radio station on my alarm clock radio had shifted a bit, so that when my alarm went off I was on a Spanish station and they were playing a song called “Estoy Aqui” by a Columbian singer named Shakira. When I looked her up on the internet later that day I discovered a raven-haired Spanish beauty. I downloaded “Estoy Aqui” and eventually (though I had to order it as an import) got the whole CD,  titled PIES DESCALZOS.  I happily listened to my one foreign language album over and over (Estoy Aqui has been on every iPod I have ever owned), even though I didn’t understand the words. The music itself, and the flow of the lyrics (be they Spanish or not) just worked for me.
I didn’t hear about her again for a quite a long while. Then one day Much Music showed a new video that was climbing the charts and it starred Shakira, though she was now blonde, and I immediately recognized her voice. The single and the album (2001's LAUNDRY SERVICE) went bananas in North America and Shakira had made it not only here, but internationally.
While I enjoy LAUNDRY SERVICE, it wasn’t till her next release that I would realize just how much of an impact she was on my music listening. As with LAUNDRY SERVICE where she did a Spanish language version and an English language one, the next effort would do the same…only the Spanish one FIJACION ORAL Vol. 1 came out first in June 2005 (Oral Fixation Vol. 2, the English one came out in November the same year), so that was the one I bought. I really can’t explain what it was like to listen to that CD the first time all the way through, but it was kind of a revelation moment where I realized that if I hadn’t been a fan before I sure was one then. By 2005 Tori Amos’s music had begun to wane and become some vile, garish shade of Celine Dion-ish prattle with no substance and even less listenability. So the top spot was primed for overtaking, and it didn’t take long for Shakira to take it. FIJACION ORAL Vol. 1 is an amazing album. It is both poppy and snappy, as well as humble and haunting. It has a hundred different instruments and styles, and Shakira’s vocals lilt overtop it all easily. The Spanish album did FAR better than expected in North America and spawned four singles, and when the English one dropped in November it did even better.
What impresses me most is the fact that she is humble about her fame and keeps a low profile when not performing, she is a philanthropist (she created a foundation that builds schools in Columbia and is a UNICEF Goodwill ambassador), she gets mad when her football team loses, and she is super smart. In fact after her Oral Fixation tour ended in 2007 she went to UCLA and attended a class for months incognito (according to her professor she was so normal looking with her pony-tail, baseball hat and hoodie that he never had any idea who she was as she used her middle name). She has always been a student of history and so the course she took at UCLA was The History of Western Civilization, and apparently she was sharp as a tack and aced the class. Also, her habit of releasing both English and Spanish versions of all her CD’s is both impressive and ingratiating for her fans worldwide. It shows that she deems all fandom important and is able to craft different songs with translated lyrics to the same rhythms and melodies. That’s no small feat in my books. She also takes large chunks of time between releases of albums, as she doesn’t want to rush anything and would rather put out a superior effort than a half-assed rushed one like a lot of bands and singers do these days.
Her sixth studio album SHE WOLF, came out in 2009 and again was huge in North America, due in part to the radio airplay of singles like “She Wolf, “Did It Again” and “Gypsy” (this last being one of my all time fave songs by her), and really went far to solidify her grip on international shores. She embarked on an international tour for SHE WOLF that sold out all over the place. She sold out the Toronto date in like a day (which is why I’ve never got to see her live sadly). 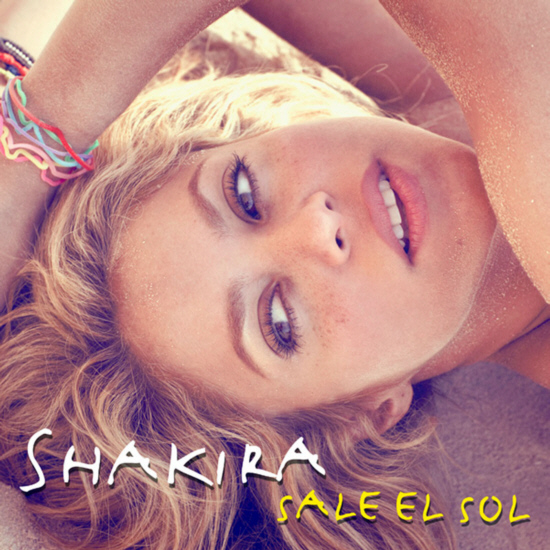 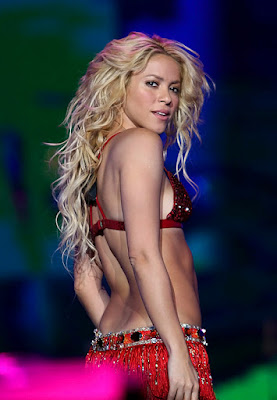 What was initially supposed to be the Spanish double of SHE WOLF (which is mostly English tracks) in 2010 ended up being a brand new album that was bilingual and would feature both English and Spanish songs. So her seventh studio album SALE EL SOL dropped in October 2010 and featured both language versions of the single “Waka Waka (This Time For Africa)” which was a track she recorded with the South African group Freshlyground for the 2010 Fifa World Cup, and it leads with the single “Loca”. For me, it also contains some of her very best work to date. It has been met with critical acclaim, and those positive reviews have been followed by fans completely embracing it. Songs like “Mariposas” and the lovely piano-heavy “Los Que Mas” are surrounding by thumping pop songs like “Rabiosa” and “Tu Boca”. It is a shining example of all the things I love about her music. She is currently touring for the disc and will hopefully be doing a second leg where I will get to finally see her live.
I wanted to write this post to show people that Shakira is more than simply the radio-played Latin pop singer some folk seem to think she is. There is a depth here, a cleverness, an incredible voice and immense talent. Just because I don’t always understand the lyrics doesn’t mean it’s not great music. In fact that helps me to appreciate the music itself. I want people to see past the radio-likability and realize what Latin fans already know, that she is a force to be reckoned with.
One last tidbit is that she was born on the exact same day, in the exact same year…as me. She not only shares my birthday, but my age as well.
I'll leave you with my favourite track from the latest disc (I think it's the gorgeous piano that gets me with this one): "Los Que Mas"
Posted by GunMetalBlue at 7:34 AM