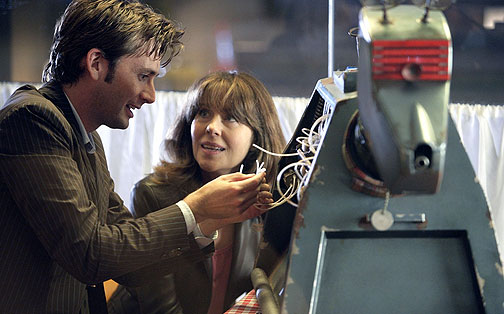 She was the first companion of the Doctor’s that I remember. Sadly Elisabeth Sladen, who played the Doctor Who character of Sarah Jane Smith, died today due to complications from her ongoing fight with cancer. She has kept four different Doctor’s company over the years since the 70’s (she was companion to both the 3rd and 4th Doctor, and then later the 10th and 11th) and had her own spin-off show that was even more successful than her original show appearances.
…to me she’ll always be the first companion I ever watched, the one who loved a little tin dog (K-9), and stood up to the greatest threats in the universe. I'll miss her.
R.I.P. Elisabeth Sladen 1948 – 2011
“The universe was lucky to have Sarah Jane; the world was lucky to have Elisabeth Sladen.” ~ Russell T. Davies (DW Showrunner series 1-4 and Sarah Jane Smith Adventures spinoff)
Posted by GunMetalBlue at 2:12 PM