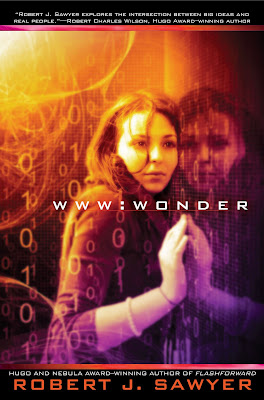 Webmind, the world’s first naturally occurring artificial intelligence has just survived an assassination attempt on his life by WATCH, the US agency responsible for overseeing the nation’s Internet security. Now, wary of the tenuous nature of his own existence, Webmind must convince the people of the world of the purity of his intentions and stave off another attempt at his life.

Of course none of this would be possible without Caitlin Decter, a 15 year old formerly sightless teenager, who’s experimental vision is directly responsible for helping Webmind come into being. Caitlin is Webmind’s human face to the world, appearing on television and helping the A.I. plead his case in front of the United Nations.

But the world is still afraid of what Webmind can do. Despite his attempts at increasing the net happiness of humanity there are forces at work within the government that won’t rest until Webmind is destroyed. It’s a race against time, man versus machine in struggle that could determine the fate of humanity.

I can’t review WONDER, by Robert J. Sawyer, the third instalment of his WWW trilogy, without first talking about THE WEALTHY BARBER. WB was a Canadian financial self help book from the mid 90s that attempted to teach money sense to readers through a novel length allegory. Roy, a well to do barber, would have friendly chats with his customers and in doing so would reveal essential truths about the nature of finance to them over the course of his tales. High art it wasn’t, but it got the job done.

WONDER is the WEALTHY BARBER of artificial intelligence. Sawyer does a great job at advancing genuinely interesting theories and chatting knowledgably about what the emergence of A.I. could look like, but the plot of his book is paper thin (yukyuk) and its only purpose is to serve as backdrop for his ideas. I want to be really clear about this. WONDER is a captivating read, but for all the wrong reasons.

Its more education than entertainment, and for a novel that purports to be a work of fiction, that’s a problem for me.

The plot is lacking. There’s never any real sense of the story’s stakes, no escalating conflicts to provide grist for the reader’s mill. Instead the audience is treated to a series of moderately threatening obstacles which Webmind hurdles with ease every time. The story’s prime antagonist, Peyton Hume, is a paranoid military scientist who never manages to present a credible threat to the worldwide A.I. Instead he’s reduced to skulking in corners, making dire prognostications and wholly unable to meaningfully follow through on any of his plans.

This is a trait of many of Sawyer’s characters. Aside from Caitlin most of the characters in the novel are completely two dimensional. They are, for all intents and purposes, straw men, being of no real substance, no goals and objectives of their own and who’s only function is to parrot the opinions and theories of the author.

How else do you explain the wildly unnecessary chapter about the validity of atheism, a recurring hobby horse of Sawyer’s, but one that has no real bearing on the subject matter at hand.

The best character seem to have a life and essence all their own, but Sawyer treats his characters like chess pieces, moving them casually from point a to b, in order to ensure they complete their given tasks and are in place for the novel's climax. And once these characters do fulfill their roles they are simply plucked from the board, never to be heard from again and their plot lines never satisfactorily resolved.

In fact WONDER reads a lot like an essay at times. At the beginning of a chapter Sawyer advances a hypothesis on a subject that is important to him and then spends subsequent paragraphs proving his thesis. It’s an interesting approach for students of the subject, but not one that lends itself well crafting a suspenseful story.

And that’s the problem with WONDER in a nutshell. It’s not a story, it’s a thought exercise masquerading as fiction and should be treated as such.

I’m not doubting Sawyer’s bonafides and extensive knowledge of his subject matter. But he’s trying to have his cake and eat it too. He spends too much time serving the rational, dispassionate scientist and not enough catering to the needs of the wild and unpredictable prose writer.

Character development, escalating tension and conflict are all essential elements of nearly any work of fiction and sadly they just aren’t present here.

I have a soft spot for Sawyer, I enjoy reading about the bits of Canadiana he sprinkles into his work and his books are always interesting and well thought out. I always take something away from them.

But just because THE WEALTHY BARBER taught me about the value of putting 10 per cent of my paycheque into an RRSP doesn’t mean it’s a good book, just an informative one.
Posted by Chris at 8:07 PM