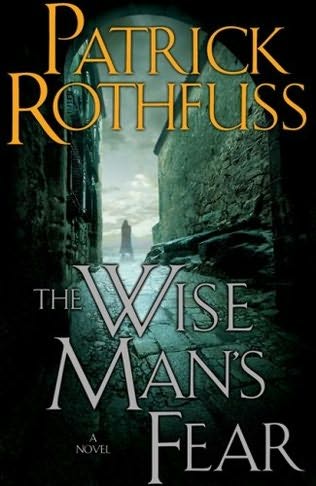 It’s quite hard to review a book like Patrick Rothfuss’ WISE MAN’S FEAR, and quite frankly I was kind of not looking forward to it. Not because I didn’t enjoy the book, far from it, but I didn’t have the foggiest clue where to start with such a monstrously sized behemoth of a book. A few reviewers did it in pieces which seems like the smartest route, but the ones who did that split it up as they were reading it, and I’ve been finished for days.

I also don't want to give too much away of the story so I won't talk too much about specific plot details, and will try to stick to the broader strokes.
So let’s start with the obvious then. Did I or didn’t I enjoy the book? Of course I enjoyed it! It was a hell of a read and is (if possible) an even more satisfying read than its predecessor THE NAME OF THE WIND. Here we continue the story of the Kingkiller, Kvothe: concerning his youth growing up studying magic at the University, playing music at the Eolian, and being stupid about love.
That is actually where we start properly. Kvothe is again ready for another round of admissions (and the need for another loan for tuition) to the University, his friends are trying to keep him out of trouble, and his nemesis Ambrose is causing him no end of grief again. Denna is still this tantalizing relationship that is a thin whisper that will blow away and disappear if Kvothe does the wrong thing. He still has no patron and therefore has very little money to pay for tuition amongst other things. Thus does he find himself again working in the Fishery (Artificery) making sympathy lamps for chump change. Does this sound familiar? It should. This is pretty much what happened in the first half of the THE NAME OF THE WIND. Well, the same sorts of things are going on with Kvothe in this book. Some people got a bit tired of this, same old, same old routine, but I didn’t really. I like the University setting and I don’t quite mind the retread ground as in those pages are some serious nuggets of good info. Besides which, Rothfuss' prose is so gorgeous that you kind of forget all that anyways and just compulsively turn the page.
The University stuff stops around the page 300-ish mark when Kvothe takes some time off from school and travels to help a major nobleman in Vintas. This is the portion of the story that I referred to as Final Fantasy-style leveling up. Nearly the entire rest of the book is a hundred page sequence, followed by a different hundred page sequence, followed by…you get the idea…that all concerns upping Kvothe’s skills in various disciplines and aspects of grown up life.  This is not really a complaint so much as I could kind of see-thru what was going on, but I wasn't upset about that. Kvothe will need certain skills to become the infamous man that he will grow up to be (the same man who is hiding as a disguised innkeeper in a backwater town, telling this story) and to acquire those skills requires certain events that will bequeath them to him. These leveling up portions were just as good as the beginning and were a nice change of pace nevertheless. The only section that dragged for me was the faerie Felurian 100-page sequence as it just seems to go on forever and doesn’t really need to. This is however a portion of the book where Kvothe meets a varied number of interesting characters, some of which have yet to play their larger parts in Kvothe's tale. I am still unsure of their loyalties but there is some very big hint dropping on the authors' part as to who certain people MAY be….but we’ll have to wait for the 3rd book to find out. There are some nice little twisty bits throughout and at the end to keep us on waiting on baited breath for the final volume.
All in all, Rothfuss’ long-time-coming second Kingkiller Chronicle is everything I could have desired it would be. Sumptuously written, and deftly executed it is the type of book that will keep you company into the wee hours, and hold you for ransom, kidnapped, eyes glued to the page. It is an enthralling continuation of a very clever tale, one which may not have many red herrings, but instead has umpteen twists and turns that you may not be expecting.
Denna continues to be the most annoying character in a fantasy novel, and Kvothe’s idiocy regarding her is either the most well written example of young Kvothe’s poor social skills, or she is just meant to be annoying and he meant to be a daft, love-blind fool. Either way it makes for a riveting story.
The book clocks in just shy of 1000 pages, but none of that really ever felt too long and boring. Like I said above the Felurian stuff is overlong and shows it’s wear after about 30 pages, but aside from that part I was never really sighing thinking I’d like him to get on with things…and that is simply due to his skill with writing craft. This is just a very well written book and it shows.
If you liked THE NAME OF THE WIND, I am positive you will enjoy WISE MAN’S FEAR even more, and quite certainly it will up your desire for the 3rd book.
Posted by GunMetalBlue at 6:21 AM