Movies: Super 8: A Study in Nostalgia and Style. 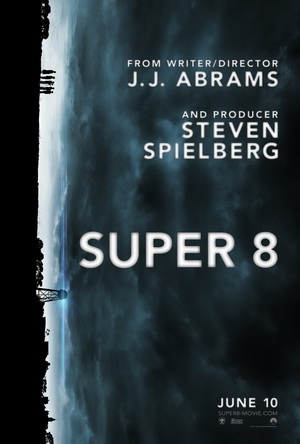 My parents didn’t take me to see E.T. The Extraterrestrial in the theatre. They took my sister, but felt that at the tender age of five in 1982 I was too young and it would scare me. I still remember my mother coming home after the film and apologizing to me and saying it was not too scary and they should have brought me. I ended up getting to see it a few years later (though I can’t recall how, I think it might have been a repeat screening on the big screen downtown) and I was spellbound. That was my first Spielberg flick, and I think it started me on the road to fandom for not only the director, but the type of clever family fare he could deliver.
It’s kind of hard to find that sort of movie magic these days. I mean yeah, INCEPTION is brilliant, AVATAR is a visual feast, THE DARK KNIGHT is an incredible crime thriller, the HARRY POTTER films are excellently done, and LORD OF THE RINGS was a triumph of movie-making and storytelling…but do any of those give you that warm feeling that some films of the 1970’s and 1980’s did? I mean one could argue I am being nostalgic for a different time of movies and more importantly my own youth…but I don’t think so. While they are few and far between there have been a FEW films in the last 15 years or so that made me feel something akin to what E.T. did, just not oodles. So in fact I think it has more to do with style and filmmaking skill. For example, while I feel that for the most part Spielberg’s latest Indy flick THE KINGDOM OF THE CRYSTAL SKULL was an awful entry in the series and a really BAD film (An issue that I place squarely in the lap of writer George Lucas rather than director Spielberg)…there are still hints within it of the movie-magic that captured me as a kid. That was one reason I knew it was stil possible to make a film like this. You know, where there are sweeping suburbia shots, purple-y orange twilight vistas, the night dark is always dark gray or navy (never black), and kids still are kids.
Well, J.J. Abrams, the man who gave us ALIAS, LOST, FRINGE and even the STAR TREK remake and MI:III, it would seem, has made this sort of film. Abrams apparently grew up shooting films as a youth on Super 8 film camera’s (just as Spielberg did) and has made a film revolving around that premise. A bunch of kids who make home made monster movies with Super 8 cameras accidentally film the beginning of something much bigger and more real invading their sleepy hometown. If you can watch the below trailer without summoning up nostalgic E.T. and late 70’s early 80’s style filmmaking I’ll eat my hat. Here you have a film director capturing that magic that made those Spielberg (and his contemporaries) films so great. It’s family fare, but there is nothing here that will make you feel that you are having to “sit through” something your kids want to watch. This is REAL “let’s take the kids” family enjoyment where the whole family will benefit.
Now, Spielberg is producer and Abrams and he both came up with the concept, so it makes sense it would look like this, but what impresses me about Abrams is he knows how to ape film styles. STAR TREK had a “look” and so did MI:III, and as such so does SUPER 8. Abrams is a force to be reckoned with already in my eyes, and if he pulls off this movie with the magic I feel from the trailer, then he will have jumped up a few more spots in the “director” hierarchy within Hollywood elite. Concepting a story with someone like Spielberg is a start.
The film stars Elle Fanning, Amanda Michalka, and Kyle Chandler, and is due to be released on June 10, 2011. See the latest trailer below.
Posted by GunMetalBlue at 6:38 AM