Comics: Nonplayer by Nate Simpson (AKA the next comic you NEED to buy) 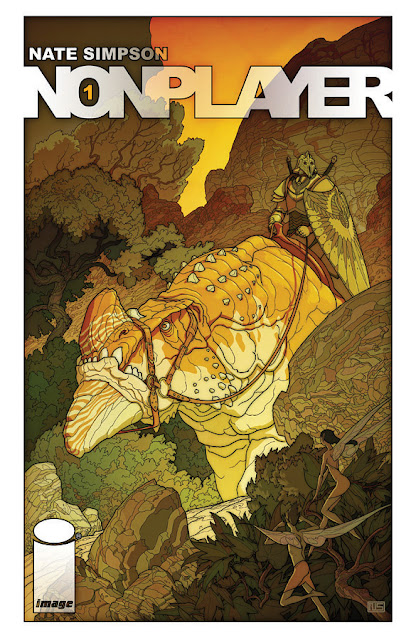 Every now and again a comic comes along and kind of stuns everyone silly. The kind of comic that's art stops you in your tracks and makes you go "Whoa. that is impressive!", and then you read up on what it is about and you think to yourself "Well shit, I HAVE to read that."

Mid-21st century America doesn't have much to offer Dana Stevens, but there's plenty for her to live for inside Warriors of Jarvath, the world's most popular full-immersion online game. In the real world, she's a tamale delivery girl who still lives with her mom, but inside the game she's an elite assassin. When she gets the drop on King Heremoth, a celebrity non-player character, she thinks she's finally got a shot at fame. But when she slays Queen Fendra, the King's reaction is disconcertingly realistic. Something's amiss in Jarvath, and the effects may reverberate well beyond the boundaries of the game.

Well, that's what happened to me (and the buzz is building) with Nate Simpson's series NONPLAYER, the first issue of which comes out on April 6th. From sweeping gorgeously illustrated vistas for the "within game" stuff, to the urban landscapes of the "real world" stuff the art on this dude's book is absolutely breathtaking.  Like stop the presses we have a new contender for my top fave artist spot (currently held by Joshua Middleton)...like I could sit and stare at these panels all day. Don't want to take MY word for it?

Okay, how about from one of the heavyweights in the comics world:


“This guy’s going to be a big deal... The whole thing is just a fucking stunning piece of illustration.”
-- Warren Ellis
Yeah. That's right! What...another one? Okay.


"Nonplayer's the best new comic I've seen in years."
-- Frank Quitely
Kind words indeed. Though from what I could see of the preview the comic stands to impress and for a breakthrough book like this I am confident that this will put the man on the map. I only begin to worry that it may be so popular I'll be hard pressed to get my hands on it for each issue release. I'll cross my fingers because the minute I saw this I knew I wanted, no NEEDED to read it.
Look out for this one at your local comic stores, and if your local comic store isn't carrying it, then they are silly and you should tell them such and force them to order it.
Personally I can't wait.
Posted by GunMetalBlue at 1:35 PM