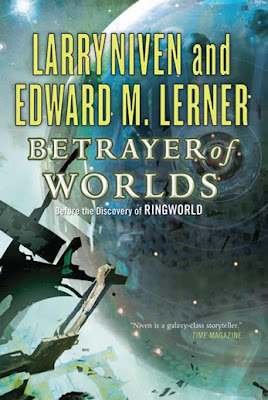 Strung out and hopelessly addicted to painkillers, Louis Wu has just been drafted.

Nessus, the infamous puppeteer scout, needs Wu to help him figure out a way to save his planet(s), the Fleet of Worlds. The Fleet is searching for a new place to call home, racing ahead of a supernova explosion from the centre of the galaxy. The only problem is that directly in their path is a race of alien starfish called the Gw’oth, who have a good reason to distrust the Puppeteers.

Nessus is hoping the Gw’oth will let the Fleet pass unmolested, but he knows he can’t rely on their goodwill. Achilles, a murderously insane puppeteer, is fermenting trouble behind the scenes, using the Gw’oth as a convenient scapegoat in a bid to manoeuvre himself into leading the Puppeteer people.

A collision seems eminent as these two cultures get closer and closer to waging an all out war and Louis is powerless to do anything to prevent it.

BETRAYER OF WORLDS (BOW) is the latest entry in the influential Ringworld series. It serves as a direct prequel to RINGWORLD, which was first published in 1970. Although Niven and his works may not be as popular, or as well known, as some of his contemporaries it is important to note that his fingerprints are all over the modern face of science fiction. (You don’t get the uber-popular video game HALO without liberally borrowing a couple pages from Niven.)

Which is why BOW is so disappointing. I don’t think I’ve ever been as let down in the expansion of a fictional universe as I have been with this book. This isn’t meant as a commentary on the quality of the writing here, but rather a criticism of the way the writers have chosen to extricate themselves from some of the larger binding continuity issues.

With the success of the HALO franchise I can empathize with wanting to get new Ringworld books into print. There’s a natural resonance between the two properties and an opportunity for the Ringworld books to make a little bank.

But you can’t do a Ringworld story without Louis Wu and, if possible, a Puppeteer or two to boot. And that’s a problem, because Wu and company have already come to the natural end of the central Ringworld storyline and it would get increasingly complicated to spin that particular tale out any further. A prequel gives the writers a clean(ish) slate to work from and allows them to use characters that would otherwise be off-limits.

But the Gordian knot in this scenario is finding a reasonable explanation for why Wu has no memories of his pre-RINGWORLD adventuring when he’s clearly traversing half the known galaxy playing kingmaker. Niven and Lerner’s solution to this problem is to have Wu willingly erase his memory at the end of BOW. A solution as misguided as it is insulting.

Wiping Wu’s memory removes cause and effect from the novel and essentially turns BETRAYER into authorized fan fiction. And, like almost all fanfic, BOW falls prey to the medium’s many weaknesses. The authors are free to use Wu in any way they see fit, even if that way causes him to act against type, because his action will all be nullified in the end. And, if Wu’s actions don’t matter, if there are no consequences to his decisions, then why use the character at all?

It’s like being stuck in that episode of THE SIMPSONS where the gathered nerd fandom is attempting to pick apart the plotlines to XENA: WARRIOR PRINCESS only to be told their efforts are wasted because, “A wizard did it.”

A memory wipe is sloppy and insulting and taints the rest of the series by relying more on fan nostalgia then adding anything significant to the shared history of the world.

In fact, I got the distinct impression the authors were more interested in playing around with the popular characters of the Ringworld universe, and demonstrating the depth and breadth of their knowledge of its inhabitants, then they were in crafting a story that develops and further explore this unique fictional playground.

Niven and Lerner introduce a host of interesting concepts and ideas, such as the hyper development of the Gw’oth or the intricacies of Puppeteer politics, only to chuck the finished product into the blast furnace and tell readers that ‘it didn’t really matter’.

If you just want to read about the Ringworld universe then I don’t think you’ll have too many problems with this book. It’s short, sweet and both writers do a perfectly acceptable job in creating something thats easy to read. If you’re looking for something that honours what came before and expands on its achievements, I'd give this a rethink.

Continuity is a fickle thing. It can be a crutch for the unimaginative or a boon to the inspired. And many good authors have bent themselves into a pretzel trying to tell a story ‘their way’ while remaining true to the original material, the best authors know how to use continuity to add flavour and dimension to their work without treating previous stories as obstacles to be overcome.

BETRAYER OF WORLD is a good idea, poorly executed. Pass.
Posted by Chris at 9:34 AM