Book Review: Indie Spotlight: The Kinshield Legacy by K.C. May 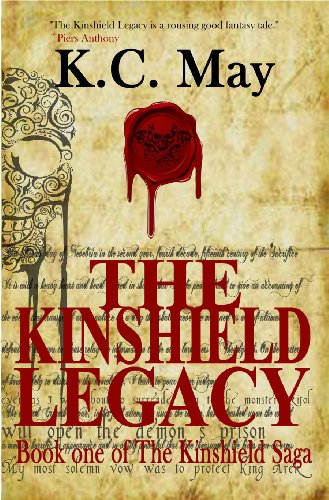 When it comes to new authors, especially indie authors I approach with caution. I have made clear that these new indie authors need to spend the time making the book LOOK good to be taken seriously. If I can recreate your cover on my Mac in less than an hour using an old photopaint program…you aren’t trying hard enough. The same goes for the font inside. It should LOOK like most other books do on the inside. Use a nice font and paper. Spend the time and money. If your written word isn’t worth that effort, then why should I read it?
Indie author K.C. May was kind enough to send me a proper review copy of her book THE KINSHIELD LEGACY, an epic high fantasy with a bunch of the tropes you’d expect from the genre and some you don’t. I mention the cover art and the inner font and paper here for a reason. The cover art is NICE (in comparison with a lot of the others in the indie book world)…in idea…not as great in execution. It’s lovely looking, but when I received the copy I noticed the resolution of the images. They were a bit jaggedy and therefore lower than the proper DPI (dots per inch) for printing. The art itself is the type that could be created in Illustrator with vector line-art and look identical but sharper and more polished with no resolution problems. Just a note for a more polished LOOKING final product in the future so that when folk see it at the store they stop and marvel. This book could have looked awesome if the art was the proper resolution and the colours were executed properly. The inner paper used was nice muted cream, but the font itself looks like it was done on a typewriter and that distracted me reminding me that it was an indie book.This is merely my humble opinion as a guy who reads a lot. The idea in May's cover design is perfectly sound, it just needed something more to splash out at people who walk by it.
Thankfully the story stands on its own and is well worth the read. Here is another of these recent high fantasy reads that drops back to the tropes of the seventies fantasy world. Reluctant Knight who doesn’t want to be king, the helpful female warrior from a sisterhood of female warriors, the blacksmith who can forge great weapons, and the powerful wizard. Yes indeed it is all very well-trod territory, but May veers away from letting you notice with her engaging storyline, which while it is also slightly generic (including a cave and a stone maguffin) is nonetheless a very fun tale full of twists and turns I wasn’t expecting. The action is paced quite excellently and I found myself enjoying those action scenes immensely.
The book is not without it’s problems though and as a whole suffers from two issues. One is the characters. There are simply put, too many. This book would have benefited from a paring down of the amount of them. If this book works as a standalone (which I believe it can do) then it needs to have less to concentrate on. If we narrow the beam and focus on the main set of characters more then we will get a more refined story. That to me, in a book such as this would have boosted it from very good read to great read. The second issue is the dialogue at times tends to be a little clunky and awkwardly phrased. As well, all those extra sidelong characters (I mentioned above) having conversations all tend to have the same voice. NOTE: The character names seem silly until you realize the reasons behind those names so don’t let that throw you off.
Those issues aside, the main protagonists are all fairly decently fleshed out. Gavin and Daia I think especially stand out and interesting to read. The bad guys are bad. Like flat out bad, evil, your sweet old granny would kill them with no compunction because they are that evil. However (and here is where the stuff I was pleasantly surprised by comes in), you know in James Bond movies when the bad guy is stupid enough to flesh out his scheme and give the good guy time to get the upper hand? May's villain doesn't do this and is instead rather tricky and well worthy of being bested by our heroes, making their subsequent plight carry even more weight. In another book her black and white villains and heroes wouldn’t work and would seem too easy…but here within the pages of this classical fantasy style series it works perfectly.
I did find myself reading chapter after chapter and May is adept at chapter endings that make you want to read on, and once the story gets properly going you will be in for a really good fun adventure.That's key in this sort of book, always keep the reader interested and she does so with aplomb.
Though I can tell she is a new author as the writing isn’t “knock you out fantastic”, it is still nonetheless well written, well paced and exciting.
The story is wholly interesting and by the time you get to the end you realize that although it doesn’t go out of its way to add much new to the arena, it is definitely entertaining. That is really all I ask for out of this sort of classical high fantasy book. Entertainment plain and simple. You will get that with THE KINSHIELD LEGACY in spades. From what I hear this is the first book of a series and I would be very interested to read the sequel. A fun and entertaining read!
Posted by GunMetalBlue at 7:11 AM

Email ThisBlogThis!Share to TwitterShare to FacebookShare to Pinterest
Labels: K.C. May, the kindshield legacy review