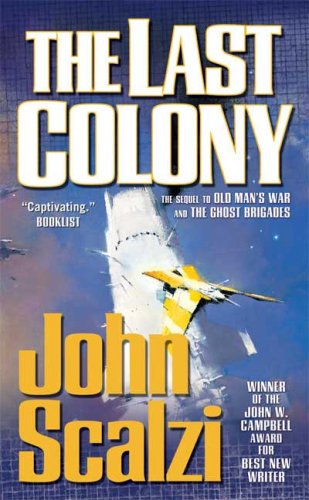 Publisher: TOR Books
Genre: Space Opera/Military Sci-Fi
Page Count: 320 Pages
Author: John Scalzi
What to do when you find yourself continuing to sing an authors’ praises again and again. Case in point: I am finding myself stymied for things to say about John Scalzi and his OLD MAN’S WAR series, since I’ve already said them in my two previous reviews.  The man writes excellent, easy to read space opera’s with compelling characters and plotlines.
What else can I say?
With the third book in this series THE LAST COLONY Scalzi brings back POV character voice from the first book John Perry. A character that is rye and wise, but also a smartass take-no-shit kind of guy and fun as hell to read about.  He is joined by his (now) wife, ex special forces officer Jane Sagan and their (now) teen adopted daughter Zoe Boutin Perry (daughter of mad traitor scientist Charles Boutin).
The story starts with John, Jane and Zoe (and her Obin bodyguards Hickory &
Dickory) leaving their colony world of Huckleberry (where John was an ombudsman) to help the CU start a new colony on the planet Roanoake with an amalgam of second generation colonists selected from ten different worlds. The only problem with that is that the mysterious 400 system alien Conclave have avowed that no one is to colonize in the system anymore…and they threaten anyone who does with swift and powerful retribution. So the crew skipping to Roanoake are headed for certain destruction…or are they. Things start to unravel almost immediately with challenges to John and Jane’s power as leaders from other colonists and with an initial twist that throws the whole story into a spin that changes it entirely.
From the moment they land on Roanoake the story takes of not only at a rocket pace, but with so many unique twists and turns that my brain didn’t know what to do. Every single turn is red-herring-less and completely unexpected. The Conclave is explained in its entirety, the mysterious Obin and their near worship of Zoe (whose father Boutin is considered a saint by their people for bringing them “souls”), and the true nature of the Colonial Union and the CDF is revealed.
The characters are even more fleshed out her than they were in the first two books, with Sagan and Perry becoming even more endearing as people than I previously thought them to be. The depth with which Zoe is handled is decent as well, though we only get a lot of her in the latter half of the book, and her Obin become major players in that section as well.
This book switches gears from the military aspect and uses the skills they learned therein to useful advantage when trying to control a whole colony of people, most of which have their own ideas on how things ought to be run. This was nice as we already had two books from the military standpoint and this book seems like the natural progression. Make no mistake though as there is still a lot of action and intrigue.
Basically I’ll say it a 3rd time. This book is a winner. A ferociously paced, action packed winner that keeps you guessing about true motives till the last few pages. It brings things to a nice close (even though there is still ZOE'S TALE which tells these same events from her POV).
If you liked the first two books then you will certainly like this one as well. Scalzi has solidified his place as my favourite sci-fi writer.
Posted by GunMetalBlue at 6:46 AM