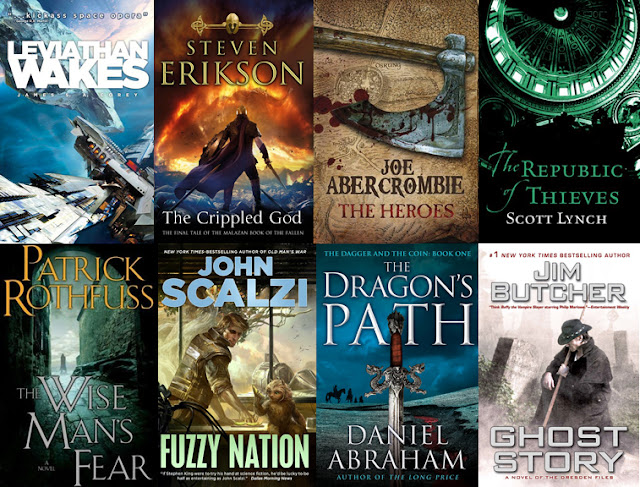 2011 is shaping up to be a huge banner year for book releases. In late 2009 I made a post on my old personal blog about titles I looked forward to in 2010, and I certainly got to read them all, with Brandon Sanderson’s THE WAY OF KINGS stealing the gold medal for my favourite book this year. I am not going to speculate who will take the prize in 2011, but from the looks of the 2011 list the contenders have doubled since last year. In that same vein, please stay tuned over the Christmas Holiday’s as we will be posting a list of Awards for Iceberg Ink for the best of 2010.

So, without further ado, in completely random order, I give you:

I’ve not read Daniel Abraham’s The Long Price Quartet, but I’ve heard nothing but good things about it. That said, the prospect of his foray into Space Opera Sci-Fi has me excited.

This is a no-brainer. The final book in Erikson’s epic fantasy series will certainly clock in at over 10,000 pages total when done and will stand as one of the most respected and complex fantasy stories ever told.

Still utilizing and fleshing out the world he created for his First Law Trilogy, Abercrombie brings us another standalone volume, this time concerning a bunch of characters that are likely not (considering the man’s style of storytelling) heroes at all. But therein lies my excitement!

Delayed, but not as much as other books (*wink wink*) have been, the second volume in Rothfuss’ much lauded Kingkiller series about Kvothe is finally set to drop next spring and personally I can’t wait as the first book (THE NAME OF THE WIND) was one of my faves for 2007.

Oh how delicious the first two books in this series are. Like Ocean’s 11 in a fantasy setting, Lynch’s very realized world of Camorr is both wondrous and dirty. I absolutely fell in love with the first book (THE LIES OF LOCKE LAMORA), and have been patiently awaiting this volume (delayed due to the passing of the author’s father), so I pleased to see it will be dropping in the spring as well.

Reynolds is one of those Gollancz authors that I came to late, as my sci-fi taste is small compared to fantasy, but his Revelation Space books are some of the best space opera’s I’ve read ever, so I am very excited about this new series and where Reynolds plans to take us next.

Another new sci-fi guy whose work I discovered this year and devoured. His Old Man’s War series is currently kicking my butt with awesome when I read them, and the thought of him doing a revamp of a previous book has potential to be very fun!

I can’t say much, cause every other word would be the “f” word, but sufficed to say, this 4th book about foul-mouthed, kickass Caine/Hari is one that will totally be an EFFING pre-order. Nuff Said.

The second in a duology about the pre-history of Shannara. I liked the first one well enough, and look forward to see where we go with the second. I am also a bigger fan of his new stuff than I am his old stuff.

Okay. This guy is a machine, and probably one of the most respected authors in the genre. He also has early onset Alzheimers and continues to push out books (simply amazing man). Add to this the fact that this new 39th Discworld book will be a Night Watch book about Vimes & Co…oh my god, my excitement knows no bounds. This is probably in my top 3 picks I am looking forwards to reading, no question.

A new Abraham Fantasy series, which he has gone on record as saying will be more “classically fantasy-like” than his previous series. Definitely one to look out for.

I was privileged enough to have discovered this author’s books this year and haven’t been disappointed by one of them yet, so it is with great impatience that I await the final book in this series, cause I wanna know where it all ends up! Very excited.

Fantasy It-Boy Sanderson can do me no wrong recently and with the recent announcement of not only a new Mistborn novel (with Guns?! Awesome!!), but a new YA series about magic users battling chalk creatures I am even more excited! Can't wait for late 2011 for these.

Last, but certainly not least, ever…If you asked the impartial version of me which book I was looking to most next year, the answer is easy. The twelfth book in this series which came out last year, CHANGES, was such a cliffhanger that you will be hard-pressed not to find me with my nose against the glass of the doors to the bookstore the day this drops in the spring. One of my fave series, and my favourite author ever…yep. This is gonna be good!
Posted by GunMetalBlue at 10:37 AM