Mega Event Madness! (A random musing on FEAR ITSELF) 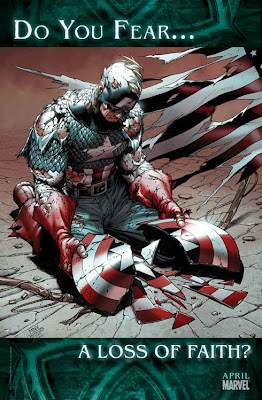 So it seems like the silly season of comic books is back.

As nice as its been to take a break from the over-hyped, over-indulgent and over-exposed big two mega events you had to know it was never going to last. Company wide crossovers where ‘everything changes’ have been the norm for a long time now.

FEAR ITSELF, announced today by Marvel comics, is simply the latest entrant in this proud comic book publishing tradition.

Helmed by writer Matt Fraction and one of my fave artists, Stuart Immonen (among others), the mega-event apparently deals with Marvel’s pantheon of superheroes throwing down with the 616’s God of Fear.

There’s a tried and true pattern to these things now, so I’m going to go out on a limb here and make a couple predictions.

1. The little corner of the Internet where us comic book fans gather is going to erupt in rage and indignation for a day and a half. Some of us will complain about event fatigue. Others will look forward to the event itself and argue that people shouldn’t say anything until they see the actual product.
2. Marvel will create elventy-billion FEAR ITSELF spin offs, one offs and minis, all of which will be read exactly once and then stuffed in someone’s longbox, never to see the light of day again.
3. There will be a brief spike in sales, followed closely by a return to business as usual when the event is over.
4. The main series will be delayed. Several times.
5. There will be a new Marvel Universe status quo that will last less than a year before everything gets encased in amber again.
6. Life will go on.
7. And because the whole thing has to do with fear I’m guessing Daredevil will show up at some point in time, just because. And yes, I know he’s dead.

I’m not a Marvel guy so none of this stuff really affects me. But let’s be honest, its really just a matter of time before DC shines a light on its own mega event and I’m forced to wade through the morass of titles that are sure to pop up in its wake.

I think the creators behind this event are really strong and without reservation I enjoy a lot of their work. If anyone can pull this off, I’d be hard pressed to point at more capable hands. So I wish them the best of luck and I hope they accomplish everything they’re looking to achieve.

(Oh, and can we please find some way to get Stuart Immonen back in the DCU? Seriously, he’s one of the most gifted artists working in the biz and his pencil hasn’t drawn a DC character in what feels like forever.)
Posted by Chris at 12:52 PM