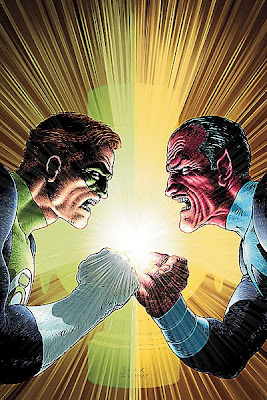 In contrast to last issue’s talky-talky vibe writer Geoff Johns has come back with a heavy fighty-fighty one. The mysterious bandaged figure, who’s been kidnapping the various colour spectrum entities, turns out to be Krona. And, as near as I can remember, the last time we saw Krona was in the pages of TRINITY where he was forced back into the Cosmic Egg from JLA\Avengers. There’s no explanation offered for his return, or why he‘s interested in the spectrum entities. So expect a Johns-style continuity patch in the next issue or so.

GREEN LANTERN often straddles the line between ludicrous and awesomeness, but the more I read it the more I’m convinced I’m privy to an institutionally sanctioned fan-fic adventure. It always seems like Johns is trying to create fantasy versions of established characters. “What if Batman was in the Sinestro Corp?” or “What if the Flash was taken over by Parallax?” If I’m being pessimistic I’d say its a cheap way to create new action figures based on a couple panels of story.

With Johns and artist Doug Mahnke continuing to rock out this title every month, GREEN LANTERN is easily one of the most consistent titles put out by DC. With a GL movie hitting the screens in 2011, anyone with a casual interest in the franchise should be looking to pick up this title to get a feel for the character and his extended universe.

Featuring the origins of Batman’s (and Bruce Wayne’s) newest enemy, The Absence. This issue is mostly explanatory back story. The Absence is born when rich socialite Una Nemo is shot in the head and dumped into the Gotham River. Through a combination of river pollution (really, are we still using pollution as a viable method of creating villains?) and Dandy Walker Syndrome, which are fluid filled spaces in the human brain, Nemo survives her experience to become The Absence. Scarred and traumatized as a result of her near death experience Nemo develops an obsession with capturing the attention of Bruce Wayne with whom she had a brief romantic fling before she was shot.

Paul Cornell serves up a perfectly serviceable, if a bit slow, origin story. And if wasn’t for the fact that DC put two artists on this thing in order to push this issue out in time I think we’d be looking at a better than average Bat-issue. But, in reality, the whole thing feels a bit rushed and I’ve come to expect something more than ‘perfectly serviceable’ from the writer of ACTION COMICS and KNIGHT AND SQUIRE. Better luck next time.

Hey, it’s the untold origin of Aqualad y’all. Turns out he’s the son of Black Manta and an Atlantean prisoner from the inaccessible undersea prison colony of Xebel. (Don’t you just love comics?) Ivan Reis draws pretty pictures and writers Geoff Johns and Peter J. Tomasi do a good job in creating an intriguing backstory for Aqualad. Interspersed throughout are brief snippets of the Firestorm plot, which is a shame because the Firestorm story is the weakest ongoing in BRIGHTEST DAY. Barring that unfortunate misstep this series is a great example of what bi-weekly storytelling can do when you put top drawer talent behind the wheel.

Guy Gardner and co. continue their exploration of the unknown sector when they’re waylaid by a squadron of rogue green lanterns who seem to think our heroes are Sinestro Corps soldiers. Of course that means we’re about to be treated to some lantern on lantern violence and writer Peter J. Tomasi succeeds in delivering the goods. Artist Fernando Pasarin continues to rock this title as well displaying an incredible range of action. From shoot em up battle segments to lower key emotional interactions Pasarin manages to capture the nuances of each scene perfectly.

A couple points to quibble with. Looks like there’s some broken telephone at play amongst the GL titles. First of all, over in GREEN LANTERN #60, we’re told that its been six weeks since the events of BLACKEST NIGHT, but EMERALD WARRIORS states that the events within its pages are taking place almost twice that amount of time later. Furthermore, in GL #60, Sinestro goes running when he’s told that his daughter’s life is in danger. This is a direct contradiction to what’s happening in GREEN LANTERN CORPS where Kyle Rayner pleaded unsuccessfully with Sinestro for help using the exact same argument.

When you try to run three separate titles in the same shared story space these kinds of things are going to happen. It’s minor irritant but it says something to the level of quality of the story telling when I’m reduced to complaining about these kind of minutiae.

So, with the departure of uber-writer it JMS it turns out that last month’s fill-in issue wasn’t really a fill in after all, but a declaration of the new status quo. Picking up the reins of the title are writer G.Willow Wilson and artist Amilcar Pinna. Sadly, the results are fairly uninspiring. This issue takes us away from the Grounded storyline to check in with Perry White and the staff of the Daily Planet. Apparently without Superman stories to print the planet has fallen on hard times and has come under attack from a local journo-blog. This issue grates on my nerves. A financially strapped Daily Planet is clichéd Superman plot line #42. I can’t begin to count the number of times this hackneyed story has been trotted out.

I’m convinced that Willow hasn’t actually checked in with a major print publication in the last ten years. He tries to portray the Planet like an out of touch dinosaur, unable to keep up with the changes in technology. Perry White doesn’t know what a blog is, he doesn’t know how it works and he sure as hell doesn’t want one near his newspaper. In reality, newspapers today have been forced to embrace new media a long time ago, employing bloggers and a vibrant web presence in order to retain readers. When a writer clearly doesn’t understand what it is he’s talking about it destroys any interest I have in the story, especially when he uses it as central plank of the whole story.

Oh, and one more thing. Perry White doesn’t smoke. He developed cancer a few years ago, almost died and he f@cking gave up cigars as a result. Do me a favour and stop trying to put a cigar back in his mouth, because when you do that what you’re telling me is that cancer scare was pointless.