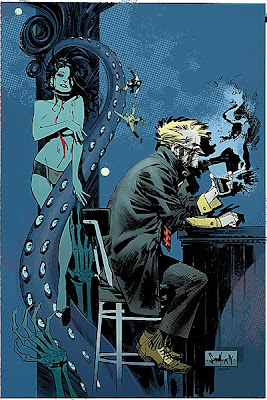 John Constantine: Hellblazer - City of Demons#5
You need five things to have a great Hellblazer story, booze, cigarettes, a cranky English bastard, black magic and a horrific personal tragedy. City of Demons has all of the above, in spades. In this final issue of the mini series Constantine comes up against the architects behind the demon blood infections and has a nasty surprise from them. And of course, this being a Hellblazer story, there's always a nasty surprise waiting for him as well.

There have been a lot of Hellblazer stories over the years, sadly of varying quality, but this particular one manages to condense what it is that makes John Constantine such a captivating character. It distills the essence of the pissy SOB and makes him as compelling and interesting as he ever was. Hats off to Si Spencer for writing one of the best 'blazer tales since Garth Ennis helmed the book. And Sean Murphy continues to blow my mind with his art. His work on JOE THE BARBARIAN and this title have rocketed him up list of personal favourites. I can't say enough good things about him.

27 #1
So, according to this, 27 is supposed to be the next big thing to hit your LCS. Apparently its getting a lot of positive buzz and the first print run of the title even sold out. In fact Bleeding Cool even goes as far as to suggest picking up an issue and flipping it for a quick buck, its just that hot. Usually I’m immune to buying the next big thing, but because it was a light week for me I bought my store’s second to last copy to see if the end product lived up to all the hype.

The titular 27 refers to the age where several famous musicians died, including Jimi Hendrix and Kurt Cobain. Will Garland is simply the latest guitarist to face personal tragedy when hitting that tricky age, contracting a debilitating disease known as sympathetic dystrophy that leaves him unable to play the guitar. Unable to find a conventional cure he starts exploring alternative methods, including contacting crackpot-scientist types, in the hopes they can treat his illness. However, he doesn’t bargain on the strange mechanical device that ends up in his chest, one that actually seems to let him play the guitar again.

It’s a setup issue so there isn’t anything really very attention grabbing here. Writer Charles Soule seems concerned with getting all his pieces in place more than anything else. The lead in issue was interesting but didn’t reach out and really grab me, which is what I want for something as hyped as this title was. I was hoping to hit the ground running with elaborate theories and pseudo-scientific conspiracies and what I got was a slow burn instead. Now that’s patently unfair to the writer who doesn’t need me projecting my expectations on the work sight unseen. But the story hook, the untold tale of 27 and musicians, was such an interesting plot that I started to craft my own plot before I even cracked the cover on the real thing. The art, by Renzo Podesta, is good, but a little too stripped down and cartoony to really be my bag. On the whole 27 was interesting but I don't think I'll have any problems leaving the second issue on the shelf.

The Flash #7
It's another famous Geoff Johns Flash break issue, where we take a pause for the cause from the regular plot line to do a little indepth examination of one Flasher's Rogues Gallery. This time out we're looking into the origins of the Flash's second most deadly White Lantern resurrection, Captain Boomerang. This issue covers Boomerang's start as a poor Australian boy, his time as one of Flash's Rogues and his career on the Secret Six. (Of course it wouldn't be a Johns secret origin tale if he didn't graft a bloody tragedy onto the Rogue's past, in this case having Captain Boomerang murder his own father at his mother's funeral.) There's also a small plot here with Boomerang having a discussion with fellow resurrectee, the Reverse Flash, about what the future holds for him. It's a typical solid effort from Johns and Manapul and as long as they both keep on keeping on I'll be happy to read what they're putting out.

Knight and Squire #3
Look, I love all things British but for whatever reason KNIGHT AND SQUIRE never really caught on with me. I don't know if it was because I found the humour wasn't universal enough or some of the British motifs were too obscure for me, whatever the reason reading KNIGHT AND SQUIRE was more obligation than enjoyment. Until this week. Reading about British Batman's Twitter battle - sorry, Twunter battle - with a clone Richard the Third, who can seemingly only speak in Shakespearian asides finally snuck its way past my defenses. The whole thing felt like a goofy Silver Age story told through a uniquely British lens and I absolutely loved it. Kudos to Paul Cornell for turning out a great story and now I'm looking forward to reading what else he's got on tap for K&S
Posted by Chris at 4:32 PM