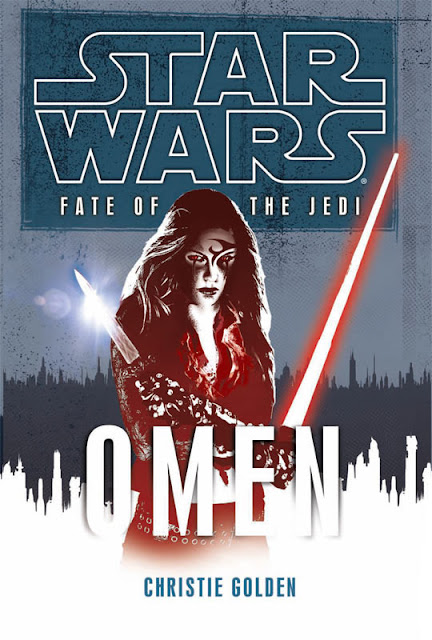 The Jedi Order is in crisis. The late Jacen Solo’s shocking transformation into murderous Sith Lord Darth Caedus has cast a damning pall over those who wield the Force for good: Two Jedi Knights have succumbed to an inexplicable and dangerous psychosis, criminal charges have driven Luke Skywalker into self-imposed exile, and power-hungry Chief of State Natasi Daala is exploiting anti-Jedi sentiment to undermine the Order’s influence within the Galactic Alliance.

Forbidden to intervene in Jedi affairs, Luke is on a desperate mission to uncover the truth behind Jacen’s fall to the dark side–and to learn what’s turning peaceful Jedi into raving lunatics. But finding answers will mean venturing into the mind-bending space of the Kathol Rift and bargaining with an alien species as likely to destroy outsiders as deal with them. Still, there is no other choice and no time to lose, as the catastrophic events on Coruscant continue to escalate. Stricken by the same violent dementia that infected her brother, Valin, Jedi Knight Jysella Horn faces an equally grim fate after her capture by Natasi Daala’s police. And when Han and Leia Solo narrowly foil another deranged Jedi bent on deadly destruction, even acting Jedi Grand Master Kenth Hamner appears willing to bow to Daala’s iron will–at the expense of the Jedi Order.

But an even greater threat is looming. Millennia in the past, a Sith starship crashed on an unknown low-tech planet, leaving the survivors stranded. Over the generations, their numbers have grown, the ways of the dark side have been nurtured, and the time is fast approaching when this lost tribe of Sith will once more take to the stars to reclaim their legendary destiny as rulers of the galaxy. Only one thing stands in their way, a name whispered to them through the Force: Skywalker.
Christie Golden’s first entry into the Star Wars Expanded Universe is a pretty solid little entry. Star Wars FATE OF THE JEDI: OMEN is all the things it needs to be to excite, enthral and drive the story forward.  Golden’s writing skill is very present as the chapters are well assembled, and the various threads running through the books are woven cleanly, making the pace just as fast as Allston’s OUTCAST. Golden was a deft hand handling the new Tribe Sith characters as well, mainly 14 & 16 year-old Vestara Khai, as she was the first to really mention them and bring some into this story. She does it well, and what was really interesting is how she was able to make these Sith (a tribe that has existed on the planet Kesh unknown for millennia) have all the traits of the Sith, but at the same time give them less of a caustic edge that the One Sith (1 Master & 1 Apprentice) always had. They use anger, hatred, fear ect. But it almost comes across as more yin-yang with the light side aspects. It’s hard to explain, and I suppose therein Golden has done her job swimmingly! Basically, instead of having the same tired “become anger, kill your master” Sith we have seen so far in the SW EU, we get a more controlled “use your anger and hate, they are strengths and will help you wield the force well to rule the galaxy”. It’s kind of a new way of looking at it, and certainly being able to watch it through Vestara’s eyes helps the reader get into it. Imagine a world where you trained as a legendary Sith (like a Jedi is trained), but no one ever really came out and said that the training you were undergoing was “evil or dark”....wouldn’t you think your way was right without being some seething monster like Palpatine, Vader or Cadeus?

So yeah, like I said Golden proves herself from the very get-go here. The best thing so far? She is following the plot threads that began in the Allston’s book well, and the book really does feel like a straight continuation of the story. That was something that LEGACY never had due to Traviss’s deviations. It makes the series much more enjoyable and connected.  It flows as it should.

Is it perfect? No. There are portions that feel like a bit like trodden ground as more Jedi succumb to the strange plague. While they always do so in different ways and it is very “all of the sudden”, at the same time the result is the same as it was in OUTCAST, the Jedi’s from the Temple try to get the sick Jedi first, and either they do or Chief Of State Daala and the Galactic Alliance do and there is arguments about where they should be kept and studied. It’s all kind of been there, done that. It’s not tedious mind you, just a bit repetitive and made for a boring chapter or two.

That said, I really, really enjoyed it, and I think Christie Golden was a splendid choice for the role of third author this time out. She has skills and she uses them. She is quite the storyteller and i applaud this outing. I enjoy her so much that I am tempted to read her Warcraft books as they seem like fun.

So, book 2 down and it was another good one. Next up in this series will be FATE OF THE JEDI: ABYSS by Troy Denning and I really am looking forward to seeing where this series takes me. So far, so good.
Posted by GunMetalBlue at 6:11 AM