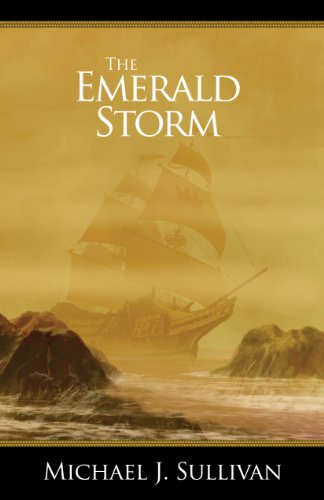 A MESSAGE IS INTERCEPTED. A SINISTER PLAN LAUNCHED. TWO THIEVES STAND IN THE WAY.
Ex-mercenary Hadrian Blackwater sets course on a high seas adventure to find the lost Heir of Novron. His only hope lies in confronting the ruthless and cunning Merrick Marius. Fearing his friend is not up to the challenge, Royce Melborn joins his old partner for one last mission. Their journey finds them adrift amid treachery and betrayals forcing Hadrian to face a past he hoped never to see again.


When I sit down and open a Ryria Revelations book, I am assured of three things.

1.       I should set aside a number of hours free, as I likely won’t stop reading till I am done.
2.       There will be more twists, turns, betrayals and heroics than should be legal in one book.
3.       That I will certainly be whisked away on another rollicking adventure with the two best thieves around.
I am happy to report that all three are once again true of Michael J. Sullivan’s 4th book in the series THE EMERALD STORM!
This one threw a different spin on things because most of it is set at sea, and funnily enough that is something that I normally am very leery about due to the close quarters storytelling. Here, it works easily! Sullivan is well aware that his two protagonists are fish-out-of-water and instead of trying to make them come across as picking up the whole sailor thing and learning it, he keeps them true to who they are. This makes for a number of funny scenes during which a shipmate will tell them the direction they are headed in seaman lingo “weathering round the point” or the like and when Hadrian or Royce look at them cockeyed they have to say it again in layman terms “go left and then head east”. It was refreshing to see that the two are still the two thieves we met books ago and there is no compromising them. Royce though in particular is growing, as Hadrian’s justice-style influence on him continues to temper him, which is nice to see. There is a particularly telling moment when a young midshipman sticks to honour-bound codes when presented with the easy road or the hard road choice and when he makes the hard road decision even I as the reader was impressed. Royce witnesses this exchange and is as suitably impressed, which to me shows a subtle change of character that we are starting to see more and more in the dark Melborn.
The ship setting is not the only one though, as we get to see not only the Dwarf made city of Drumindor which is fairly stunningly realized, but also the jungle coasts of far-flung Calis and the fabled people who live in the dark reaches therein, not to mention bloodthirsty pirates who are as relentless as they come. The secondary characters of the voyage there are all so interesting because you never can tell fully where anyone’s loyalties lay, and that kept things on this knife edge of worry even as Ryria have to continue their mission.
The second plot-thread takes place at home with Princess Arista, who keeps becoming more and more a fave character of mine with every book she’s in, she grows and grows into something unbelievably heroic in her own way. Her story weaves back through a spot of interest from a few books ago with such incredible emotion that I actually got choked up a few times. Arista just amazes me. Empress Modina/Thrace is once again starting to return to the girl we knew prior to the events of Avempartha, even though she is still haunted by them. It’s nice to see that, and add Amilia into that mix who is honestly trying to do right by her, but not knowing the whole story and you have the makings of a different kind of powderkeg. It is also quite certain that the Imperial plots are indeed thickening.
Sullivan does something else here that was subtle and snuck up on me at the end. It is clear that in the end of this book he begins to set the pieces in place for the finale two books down the road. In the final chapters you can see where our heroes will inevitably be lead as they return to a homeland rife with political strife and division. That was nice to see those pieces start to come together. I can see the mysteries want to be solved, but Sullivan continues to surprise me with revelations about characters and ideas that I didn’t see coming a mile away, or that I thought I'd figured out and wasn't even close. Haha!
You want adventure on the high seas? Check. Heroics by a Princess? Check. Jungle awesomeness with a dark and strange people? Check. Brave and stalwart soldiers? Check. Dastardly villains get even meaner and nastier? Check. THE EMERALD STORM is everything that makes this series worthy of my time, and adds even more dimensions to an already multilayered story. Another cracker that I read in one day. It’s hard to not do so. I find myself reading these books voraciously just so I can get to the next one.
Thankfully, I have a signed copy of the 5th book WINTERTIDE ready to go.
If you haven’t picked up this series yet, you really should as it’s everything you heard it is and more!
Posted by GunMetalBlue at 2:12 PM