Apparently its Love your artists week here at Iceberg Ink. Because, with one notable exception, I’ve been raving enthusiastically about every artist to put pencil to paper this week. They’re just that friggin’ good. 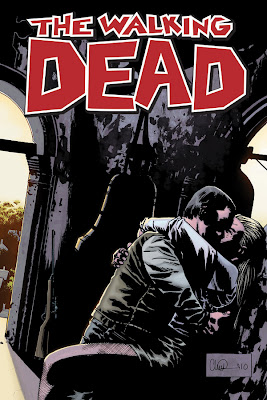 You know what makes this series so great? The fact that its an ongoing tale of the zombie apocalypse and the zombies are probably the least interesting thing about the story. Seriously, the characters, the pacing, the dialogue all mesh seamlessly with the art to create a near flawless experience. The story is fresh, interesting and month in and month out it’s always at the top of my pull list. In this issue a shootout at the compound draws the attention of a herd of nearby zombies, neatly setting up a story arc that writer Robert Kirkman has been building too since Rick and the gang escaped from the prison complex. If you haven’t seen it already, be sure to check out the premiere of the WALKING DEAD television series next Sunday. My only complaint is that I’ve read the comic so many times that there won’t be (m)any surprises for me. But I’m looking forward to seeing what Frank Darabont does with the source material.

Sniff. Grant Morrison’s ultimate Batman story is almost over. If you haven’t picked up a Morrison bat-title in the last few years, well, you’d better save yourself some time and skip to the next review; because there’s nothing for you here. Dick gets shot in the back of the head, Damien teams up with the Joker, an ancient Wayne ancestor is masquerading as Bruce Wayne’s deceased father and BW himself shows back up again after traveling thousands of years through time. Throw in some beautiful looking Frazer Irving art and you’ve got a damn good reason to read comic books.

A Martian Manhunter-centric issue with just a dash of Firestorm thrown in for seasoning. J’onn J’onzz is one of those character who I don’t know all that well. I know his basic backstory and I’m familiar with his personality traits from his time on the JLA. But for a guy who’s managed to float his own ongoing series on a couple of occasions I know hardly anything about his past. Which is why an issue like this is a helpful info dump and provides some useful character context. Apparently D’Kay, our mystery Green Martian (yes, another one,) is an unscrupulous scientist who undertook immoral experiments on her own people and then tried to purge any who’s thoughts couldn’t be read by telepathy. It’s a good, solid issue with some gorgeous art by Patrick Gleason. Bonus points though to any reader with the eagle eyes who can spot the art slip up on page 7.

It’s like reading a Wikipedia entry on comic book plots you already know. Years worth of stories condensed into 22 pages, only with really pretty pictures. Kudos to Len Wein for trying to keep it interesting by framing the whole thing through the eyes of an ordinary man. But that’s a trope that’s been overused in comics for years. Unfortunately the story doesn’t really add anything new to the DCU, then again, it was never meant to. The backup story, featuring the umpteenth retelling of Clark’s first visit by the Legion, is good for a chuckle though.

Chapter One of the new story arc, The Weaponer. One of Sinestro’s former Qwardian allies comes to Korugar, which looks suspiciously like Earth, in search of the former Green Lantern’s daughter. The Weaponer plans to take his revenge through Sora for some crime that never seems to be explained. Unable to find her, he decides to throw down with Kyle Raynerin an obligatory fight scene. This was a fair issue although it certainly had its low points. The artist, Tyler Kirkham, chose to portray the clothing and architecture of an alien world an awful lot like Earth, right down to the baseball caps and hoodies. Kyle spends a lot of time boasting about his credentials as a galactic warrior and then gets taken out in six pages. For a man who’s defeated every A-list baddie in the DCU he goes down quickly and quietly. If you’re a rabid fan of the Green Lantern world, this issue will hardly turn you off. For a fan just passing through it’s a bit like listening to the elevator music version of one of your favourite tunes.

Britain’s favourite street magician is going through some hard times. John Constantine is one of the few character’s in comic books who actually ages with the years. Lately he’s gone mad, hacked off a thumb, nearly sliced off his arm, lost one girlfriend (dead), lost a second girlfriend (abandoned in the past) and now’s he the target of some very bad people who reside in a very tropical hot spot. It all sort of feels like it’s building to something doesn’t it? After 272 issues Constantine’s life has gone through some drastic changes, but in the end he’s still the same cynical (and lonely) mage he’s always been. Thank god Brian Buccellato is around make even a grizzled old fart like Constantine seem rugged and fabulous.

I love Mark Bagley. Getting to watch him draw the hell out of the JLA-lite for 50 pages is a treat for me. This issue is all big dust up. The Crime Syndicate of Amerika is trying to take over the world and the JLA is naturally duty bound to stop them; with their fists. There’s a sub plot here with Dr. Impossible and some dark version of the New Gods that I know nothing about. Presumably it came during the time I temporarily abandoned the title.

For a line that was supposed to eschew restrictive continuity, line wide reboots and unnecessary character revisions the Ultimate Universe has proven its not immune to these overused plot devices after all. In this issue Jeph Loeb continues to tinker with the Ulti Uni by reimagining Ultimate Thor more along the lines of his 616 version. Gone is the peace loving hippie and in his place is the rage filled warrior. Perhaps there will be an interesting and compelling reason for the change. More likely, brawny Nordic warriors with squinity-yelly faces and a propensity to start brawls are considered to be more interesting than one who chooses to use his powers for unconventional means. I suggest reading this comic just because you like to watch Frank Cho draw the hell out of things. I mean, that’s a pretty good reason right there, isn’t it?