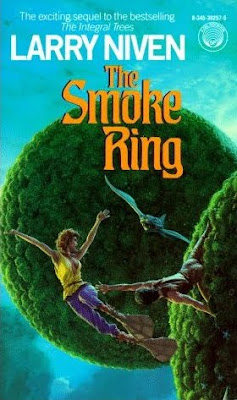 There’s a subset of sci-fi authors that I like to refer to as science teachers. They’re the brainy types who like to rattle on, at great length, about the physical composition of stars or spend whole chapters going on some technical term that leaves casual readers (ok, me) scratching their heads in confusion.

With these authors plot and character often take a back seat to thinly veiled essays on the nature of HOW THINGS WORK.

Larry Niven is better than most when it comes to walking the line between science and narrative, but even he can fall into this unfortunate genre trap. When I first cracked the cover to THE SMOKE RING

, Niven’s follow up to his 1983 novel THE INTEGRAL TREES

, I was confronted by a half dozen technical diagrams which explained the physical properties of the world of the story. I knew I was in trouble, this was going to be Niven at his science-y best.

series Niven has crafted a world with a unique set of physical properties. The inhabitants of the ring live in a state of near free fall in a band of breathable air around a neutron star. There are no earth like planets in the ring so humans must live on trees, hundreds of kilometres long. The trees slowly orbit the star, drifting throughout the band, occasionally coming close to other inhabited dwellings.

Got all that? Clear as mud?

Human beings have come to live in this state as the result of a failed mutiny against the ship Discipline, and it's AI construct, Kenedy. THE SMOKE RING picks up about 15 years after the events of TREES. Jeffer the Scientist and his fellow refugees have carved out a life for themselves on Citizens Tree. Their only link to the past is the Cargo and Repair Module (CARM) stolen from Kenedy in their frenzied escape 15 years ago. Kenedy is able to monitor the tribe through the CARM but the inhabitants of Citizen Tree check in on the module very infrequently, so he is left with an incomplete picture of what is happening.

The tranquility of the Tree is disrupted by the arrival of a family of loggers, forced into free fall by an explosion on a tree they were processing. The loggers come from the Admiralty, perhaps the most technologically advanced section of the Ring. Manipulated by Kenedy, who is desperate to learn of the fate of the mutineer's descendants, Jeffer takes the CARM, a small group of tree dwellers and a handful of the loggers into the Admirality.

It's about here that Niven abandons his hold of the plot and turns the book into an extended series of snapshots on life inside the Ring. It becomes an intellectual game, how would vegtation and animal life develop in the Ring and what would it look like? How would human beings adapt, how would their socials codes change? Is there industry and growth inside a culture that is essentially cut off from natural resources?

Through Jeffer and his band of reluctant explorers Niven constantly places the group in a series of circumstances that are only designed to reveal what life is like in the Ring. Fortunately, the author is skilled enough to keep these vignettes moving right along. I found that while, as a reader, I was getting frustrated by the lack of narrative cause and effect at least I was being entertained in the process.

As a result of the group's adventuring they stumble across the remnants of a decomissioned CARM and when Kenedy links to it he discovers that his recollection of the human mutiny is not as complete as it could be. The group returns to Citizens Tree and Kenedy is left to ponder his next move as the caretaker for this wayward remnant of humanity.

This book reads like the second part of a trilogy. And given where the story wraps up, with Kenedy gently trying to steer humanity back to the stars, I can't for the life of me figure out why Niven didn't continue on with this story, given how he's left his reader's hanging. The story's greatest failing is that, at times, it never seems to go anywhere. Instead, it meanders, with characters conviently changing their personal motivation in order to serve Niven's goals of exploring all the nooks and crannies of the Smoke Ring.

I can't help but feel that a stronger narrative would transform this book from merely an interesting read to a really good one. The characters feel somewhat bland and interchangable and there's no real sense of urgency to their actions. Even when there lives, or way of life, is at stake they calmly mosey along, seemingly not really concerned with their fate.

If you're like me, THE SMOKE RING, is the perfect commuter book. Something light and interesting you can read on the subway; a tale you can easily put down when you reach your station. Not every book strives to be a home run. THE SMOKE RING has more modest ambitions, an over the wall double perhaps?* And it achieves those goals admirably.

*note book reviews and sports metaphors generally don't mix well. Mine was no exception.
Posted by Chris at 10:50 PM