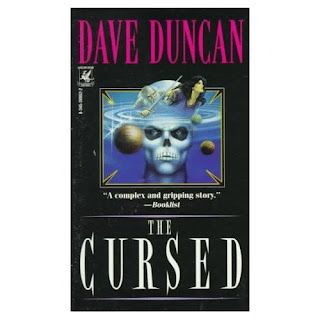 Dave Duncan is the drug I use to hook you.

Successful Canadian SF\F authors are a rare breed. Their domestic market is smaller and the competition more intense. So how is it than an incredible author like Duncan is so frequently overlooked?

I first stumbled across Duncan in my quest to read the entire SF section at my local library. Initially, I skirted around his work because I made the classic bibliophile mistake of misjudging a book by its cover. Case in point, the classic West of January 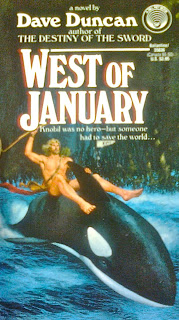 I mean, come on, look at this thing. Are you telling me that a half naked man on a killer whale is the kind of picture that would entice you to crack the cover of this book? I mean, it’s half a step away from a manga-eyed dolphin leaping over a rainbow. Or as I like to call it, 13 year old boy repellent.

Eventually I ran out of options and had no choice but to start working my way through his catalogue. And soon enough I was kicking myself for missing out on such great work.

From Duncan’s 45 novels, The Cursed

easily stands as one of my favourites.

The story takes place roughly 100 years after the fall of the of Qolian empire at the hands of the Zarda hordes. The once great empire has been reduced to a handful of warring kingdoms. There is a pervasive sense of decrepitude and decay and even rumours of a so called Renewer, who will return prosperity to the world, does little to bring hope to the world’s inhabitants.

Adding insult to injury a terrible plague, known as the star sickness, periodically sweeps through the former empire’s holdings, killing nearly everyone who contracts the disease. But it is those left behind, the ones who live, THE CURSED, that this story is concerned with.

Plague survivors are left with uncontrollable afflictions that leave them socially crippled and outcast from society.

Jaulscaths: Telepathic transmitters, unable to stop themselves from broadcasting the thoughts of those around them.
Ivielscaths: Can kill you or cure you, depending on their state of mind.
Moulscaths: Unable to feel emotions, but able to control the emotions of others.
Awailscaths: Shapeshifters, who take on a new body and a new personality every month based on the phases of the moon.
Ogoalscaths: Able to greatly influence chance and random events, although, not always for the better.
Shoolscaths: Their memories of the past is lost to them and all they (pre)member is the future. A future they cannot change without erasing their memories and risking their own lives.

Against this backdrop Bulion Tharn, an elderly farmer, and his new bride, Gwin Solith, try to insulate themselves against an increasingly bloody and dangerous future, after a wandering Shoolscath predicts Bulion will become the Renewer and reform the Qolian empire.

But the pair seem to be unable to stop the march of history, and destiny itself, from controling their lives.

One of the easiest mistakes you can make when reading a Duncan story is to get caught up in the laid back, easy going writing style of the author and downplay the events he is telling. Unlike some other SF\F authors with a penchant for pages of internal character monologuing and overwhelmingly purple prose, Duncan just wants to keep the story moving.

That’s why he can throw love, death, life, war, betrayal, heartbreak, romance and intrigue into THE CURSED and avoid the stuffy overtones that usually come with such heady subject matter.

Duncan plots his stories like Shakespeare, but he writes like Everyman. Do yourself a favour, and pick up THE CURSED right now. And if they don’t have the cursed, pick up any other Duncan book you can get your hands on, killer whales or no, and I guarantee you won’t be disappointed.
Posted by Chris at 8:20 PM