Book Review: The Bearers Of The Black Staff - Terry Brooks 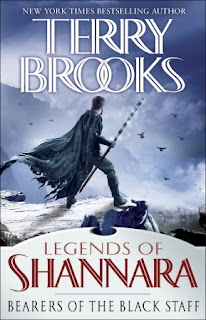 Five hundred years have passed since the devastating demon-led war that tore apart the United States, leaving nothing but scorched and poisoned ruins, and nearly exterminating humankind. Those who escaped the carnage and blight were led to sanctuary by the boy savior known as the Hawk—the gypsy morph. In an idyllic valley, its borders warded by powerful magic against the horrors beyond, humans, elves, and mutants alike found a place they believed would be their home forever.

But after five centuries, the unimaginable has come to pass: The cocoon of protective magic surrounding the valley has vanished. When Sider Ament, the only surviving descendant of the Knights of the Word, detects unknown predators stalking the valley, he fears the worst. And when Panterra Qu and Prue Liss, expert Trackers from the human village of Glensk Wood, find two of their own gruesomely killed, there can be no doubt: The once safe haven of generations has been laid bare and made vulnerable to whatever still lurks in the wasteland of the outside world.

Together, Ament, the two young Trackers, and a daring Elf princess race to spread word of the encroaching danger—and spearhead plans to defend their ancestral home. But suspicion and hostility among their countrymen threaten to doom their efforts from within—while beyond the breached borders, a ruthless Troll army masses for invasion. And in the thick of it all, the last wielder of the black staff and its awesome magic must find a successor to carry on the fight against the cresting new wave of evil.

What can we expect every year like clockwork? Winter & Snow, New fall TV shows & Summer blockbusters, and a new Terry Brooks book.

), Shannara series or even from within his recent resurrection of the Landover series one thing is always sure, the man spits out books at a schedule you can set your watch by every year. I’m admittedly a fair-weather Brooks reader, and to be quite honest it is hard not to be. His early Shannara books (aside from Elfstone’s) make me cringe with how unoriginal they seem now (mind you at the time in 1977 I am sure they seemed like the most amazing stories trumped only by his own influencer, Tolkien himself). Sadly, all these years (and Tolkien-clones ) later those early Shannara books come off as really undisguised copies of that previous work. His Word & Void series on the other hand, was endlessly inventive and easy to read and get addicted to as a unique urban fantasy.

I digress, everyone probably now knows that he had an idea a few years back to unite the two series. The Word & Void series was clearly headed for some sort of human apocalypse, and Shannara never had a stone age. Thus the Genesis series was conceived and released (3 books to fairly goods reviews). Well, that story continues after the end of that 3rd connecting book....five hundred years later to be exact.

Without being too spoilerific, Bearers of the Black Staff: Legends of Shannara

is certainly a good book, but it has its fair share of issues as well. Firstly, something Brooks always uses in his Shannara books, and one of my pet peeves is his (clearly Deus Ex Machina) Elfstones. Be they blue seeking ones, or black keeper one, or any variation thereof, the stones always seem to show up when the protagonist needs them most.. They are only briefly referenced in this book thankfully, but I know they are there and I can’t help but groan a little every time they get a mention. Beyond that the main characters here are interesting, though they don’t seem to have the diversity or the fun and playfulness of his Genesis homeless kids. And once again the descendant of the Knight of the Word (Sider Ament) is a dark brooder, just like Logan Tom and John Ross before him, and doesn’t relish his staff’s power. In contrast to Angel Perez who had a sunnier disposition in the Genesis series, and enjoyed use of her power. Nicely though there is a reason for this and it is part of the story, so I was happy with that. The elves are just sort of elves as always; they sit kept behind their walls in Aborlon and are the only ones who will listen to reason when the human trackers come a calling. they serve their purpose, but little else. At least the spoiler princess elf works in her role. Which brings me to my other complaint...there always seems to be humans who disbelieve in the coming villains or evil. Brooks world seems inevitably populated with ridiculous politicians and lawmakers who are too stupid for their own good. Sadly this means trouble for all our various protagonists, who come and warn the villages not once, but twice and it falls on deaf ears.

The Bearers Of The Black Staff is a nice little interlude into the middle ground between the end of our earth and the beginning of the world that will become Shannara, but it doesn’t hold the weight of its predecessor trilogy which I enjoyed immensely. I have hopes that the next volume in the duology will feature more of an interesting plot and maybe the characters will get a chance to break out of their molds a bit, but I am not holding my breath.

Brooks is very hit or miss for me, and when I say I am a fair-weather reader I mean that....if his book is bad I drop it like a dirty shirt. This one was not a drop it one, but I’d be lying if I didn’t say that I was slightly disappointed by it.
Posted by GunMetalBlue at 5:13 PM