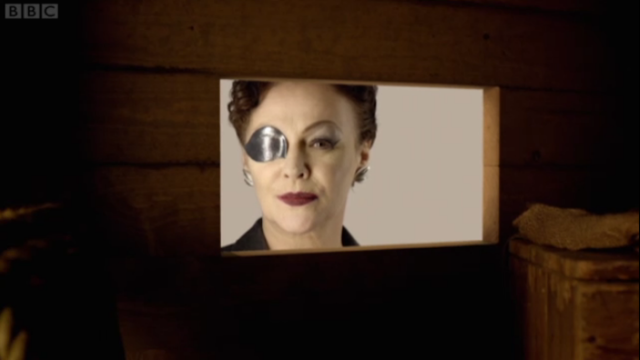 If you are looking for a review of this week’s DOCTOR WHO episode, THE REBEL FLESH, I am afraid you will have to wait a week. Like the season openers, I am not going to review one episode of a two-parter, and instead will wait till this Saturday’s THE ALMOST PEOPLE airs to weigh in.
That said we ought to have SOME DW goodness today, so how about some more crackpot theories?
Okey day!
Just one thing before we start. The eypatch lady. You know, the one from episode two and three (and now five) who appears ever so briefly, mostly says nothing through a window that shouldn’t be there and Amy doesn’t think to mention her (is she a Silent?) to anyone? Yeah that lady. Something needs to happen with her. Either progress her story or don’t put her in. I’m getting rather annoyed by her to be honest. I realize she’s there to say “Hey, something still not right here” ect…but oh my god, to have her just randomly appear takes me right out of the episode. While we are on the fact of things reappearing but not progressing…Amy’s Schrodinger pregnancy…there is only so many times that the Doctor can look at the same screen over and over and have nothing progress.
I mention all that ranting because my first crackpot theory is this:
-The eyepatch lady is some form of a Silent that Amy never remembers seeing. I also think that Amy’s pregnancy has something to do with the Silents, and the REASON we keep seeing him look at the same screen with a pregnant/not pregnant scan is that the Doctor sees it for the first time every time and then forgets about it when he turns his head…therefore not mentioning it.
-I also think that the Doctor knowing that the Flesh ™ stuff is an early version of something he’s seen “before” in the latest episode is that it has something to do with the Nestene Consciousness from Season 1 (with Christopher Eccelstone’s 9th Doctor)…and therefore something to do with the Auton’s giving Rory his desire to be so very helpful of Jennifer Lucas’ not quite evil Ganger. But then you have to bring up the fact that the Nestene appeared in a vat in a warehouse in ROSE (episode 1 of Season 1) in 2005…and this one is in the 22nd century. The answer being that it is possibly what will become of the Ganger of the Doctor having time traveled?
-Lastly, the upcoming 7th episode has been mentioned as the one where we finally find out just who River Song is and what it was she did to end up in the Stormcage prison facility and apparently set’s her finally at odds with the Doctor…when she kills a “good man, the best man she ever knew”. The episode is actually called A GOOD MAN GOES TO WAR, and its plot concerns Amy being taken by (I believe) the Cybermen (as this is their reappearance in the series for sure) and the Doctor literally going to war to get her back…thus can it finally be assumed that the “good man” River song kills is in fact the Doctor? Beyond that, what about Idris’ line from the last episode that was “The only water in the forest is the river” as something he’d need to know in the future? Where does that fit in, as it seems to be an obvious allusion to River Song herself? Does it tie back to her fist appearance in Season 4 THE SILENCE IN THE LIBRARY/THE FOREST OF THE DEAD Moffat-scripted two-parter? Also seems likely.
Well, that’s it for today’s crackpot theories. Anyone else have something to add, please share in the comments section below!
Posted by GunMetalBlue at 6:28 AM